This comic is amazing. Period.

When Elektra was announced as one of the several female-led All-New Marvel NOW! ongoing series, most people were like “cool.” Elektra is one of those characters that, like Ghost Rider and the Punisher, sort of fill this niche category of conceptually-rad but contextually-limited. The character was part of several iconic moments in the Daredevil mythos and some classic minis with the Wolverine by Greg Rucka, but for the most part she’s floated in a purgatory of amorphous fan-interest since her highest points in the late-‘80s/early-‘90s. She’s showed up in various other books like the recent Thunderbolts and the eponymous series of characters she’s most associated with (Daredevil and Wolverine), but she’s really never broken out on her own successfully. 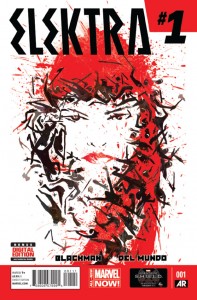 The story is pretty straightforward: Elektra is tired of being “Someone” else’s something—lover, victim, weapon, etc., and she’s decided to focus on the role that she most identifies with: assassin. She visits the Matchmaker—a delightful character designed as a 1920s-era flapper far older than she seems—who sets her up with a contract to capture the brutal, enigmatic Cape Crow. The challenge? Well, there’s two: first, Crow has been in the wind for years and second, the rest of the Assassin’s Guild is out for Crow’s head (because Crow is especially adept at killing of other Assassins and stealing their contracts). But Elektra’s the best, soooo…

The characters are on-point and the dialogue and narration are effectively terse and human. Blackman’s Elektra (similar to his work with JH William’s Batwoman) is at once brutal, graceful, and searching. He wisely does not retreat into the “numbness and cynicism” that these anti-hero stories so often degrade into, instead opting to present Elektra as lost-but-looking rather than dark-and-depressed.

The real star of the book, however, is Michael Del Mundo in a rare interior artist position. I can’t even hope to describe the beauty of this comic book. Just as Elektra is graceful and intense, Del Mundo’s painted aesthetic is some of the most visually engaging and impressive work that I’ve ever seen in all my days of reading comics. Simply put, this is one of the best-looking books I’ve seen ever. And it starts right away with two double-page spreads of Elektra “dancing” (slaying dozens of Hand ninja in an almost ballet of violence and gore). Amazing.

Buy. Must-read. Do it. Check it. Now. No qualifications and elaboration needed; Elektra #1 is one of the best-looking, best-written books on the stands right now.