I’m going to call The Only Light in the Darkness a milestone episode for Agents for SHIELD for a couple of reasons. First, this is the first episode after all of the Captain America hubbub that felt like an actual episode. Second, this episode felt like a glimpse into what season 2 of Agents of SHIELD might look like. And third, I’m finally starting to see why the show upset some viewers in the beginning. I don’t, however, believe that it’s any reason to stop watching. 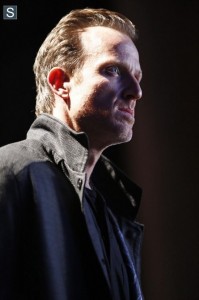 This week felt something like a return to the “freak of the week” format that the show started with, starring an old Marvel villain by the name of Blackout. We get a scene of Marcus Daniels, aka Blackout, demonstrating his powers–which include the ability to shut down the electrical impulses within a person–and then we’re back with the team in the super-secret base. Simmons works on patching up the newly returned Agent Ward while he relates his “experience” at the Fridge. Once Coulson finds out that the prisoners who resided in the Fridge are now out, he makes it the business of the remaining SHIELD agents to track down these dangerous criminals and put them back on ice. This is the episode’s first major leap in logic, as it seems like there are a lot of other things that the group should be doing. The show does a decent job of addressing this leap, but nothing to actually prevent it. This is also where I believe the show makes an attempt to show us what next season might look like–tracking down ex-inmates of SHIELD could fill a lot of spare time. The lanyards for conferences can help with proper Identification and uniformity.

After deciding to go on a villain hunt, Coulson gets slapped down a bit by Agent Koenig–once again played by Patton Oswalt–who insists that Coulson’s whole crew submit to a lie detector. There is a seriously great scene that follows where each of the team answer strange, almost nonsensical questions to earn their lanyards. Then, we get to see Agent Ward take his turn. He passes by the skin of his teeth, but the scene is wonderfully tense and definitely worth watching. After Ward gets his lanyard, Coulson, Fitz, Simmons, and Triplett all head off to track down the bad guy while Skye, Ward, and May all stay behind. May decides to leave, seriously tired of Coulson treating her like a doormat, leaving Koenig and Skye at the mercy of Ward. The rest of the episode plays out well as Skye eventually finds out that Ward is with HYDRA and Coulson gets his man. Clark Gregg once again pulls off a stellar performance, as hunting down Blackout means that he must once again come in contact with the infamous Cellist, Audrey, with whom he was in a relationship before he died in Avengers. I’ve also been impressed with Brett Dalton as Agent Ward these last few episodes. Being a bad guy has really brought something out in him and in the character.

There is moment in the episode where Blackout squares off against Coulson and Fitz and easily bests them both before fleeing into the night. There is no reason why this villain, who remembers Coulson from his previous capture, would leave the two agents alive, and yet he doesn’t even seem to contemplate anything sinister before taking off. I’ve noticed a similar uncharacteristic altruism in villains in previous episodes of the show, and I really think it’s something that the writers are going to have to get better about. These are the types of mistakes that wear on fans and bring down the quality of the episodes. It won’t keep me from watching anytime soon, but I can now see why people complained about the show in the beginning. I hope we can chalk it up to first season bugs that need working out. 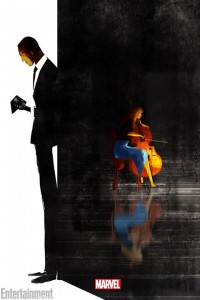 Once again, some of the best moments in the show come from the association it has with the larger Marvel Cinematic Universe. For example, it turns out that Agent Triplett is the grandson of Gabe Jones of Captain America‘s Howling Commandos. The appearance of the Cellist is also quite a delight, and Amy Acker does a wonderful job here as someone who still loves Phil, but is trying to move on. The episode ends with Agent May getting picked up by her overbearing mother, and the two take off to visit Maria Hill, who should be making an appearance in next week’s show.

Wait and see. If you’re watching already, then you owe it to yourself to ride out the season. And don’t get me wrong, there is a lot to like in this episode. But some of the loose writing in the show really needs to get tightened up if they are going to survive another season. I have to say, though, that it was nice to feel like I was getting a glimpse into the future of the show and to understand what next season might look like. There are only three episodes left before this season is done, and there is still a lot of ground to cover. Let’s see how they get there.