You can practically hear the war drums in the distance.  Wonder Woman #30 continues its march towards the epic battle that will mark the end of Brian Azzarllo’s fantastic tenure, giving each new issue a bittersweet tone.  But enough of my blubbering, folks: let’s get down to the nitty gritty. 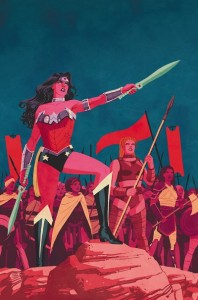 In this issue we get to see both of the soon-to-be warring sides prepare themselves for battle as the fight for Olympus draws closer.  With her mother still stuck in her clay form, Diana is now forced not only to take the mantle of the God of War but also to stand in as the new Queen of the Amazons.  This causes waves among her already apprehensive sisters who are still reeling from their own transformations, and may result in some rebellion against their new leader.  Meanwhile, the First Son continues his rampage, torturing anyone unlucky enough to cross his path.

While it was certainly on par with most of its previous issues in terms of quality, Wonder Woman #29’s ending kind of stuck out like a sore thumb.  It was strange to see Diana’s sisters returned to their human selves and immediately act as if nothing had happened to them.  Azzerallo makes up for that abruptness in this issue, taking a step back from the action to focus on some of the fallout that would logically come about in that situation.  It’s good to see that some of the Amazons are kind of pissed at their new Queen, not to mention more than a little suspicious.  This development results in more tension surfacing in our hero’s ranks, something that should add yet another level of intrigue in this climatic storyline.

Another highlight of Wonder Woman #30 is the continued sideshow attraction that is the deranged First Son.  Every scene he appears in feels like an attempt to top what was done before, whether it’s the grotesque and cruel interaction he has with Cassandra or the issue’s cliff-hanger of an ending.  First Son is a terrifying villain, one that many readers had zero expectations for and are now being pleasantly surprised by.  Even though it will mark the end of this historic run by Azzarello and Chiang, it’s hard not to be pumped for the confrontation between First Son and Wonder Woman that’s looming.

Buy It – Brian Azzarello and Goran Sudžuka give us another stellar issue of Wonder Woman, one that pumps up the tension among Diana’s ranks and showcases more show-stealing moments for the First Son.