And so begins the third and final act of “Zero Year,” a storyline that has somehow managed to present to us a fresh and exciting version of Batman’s first days despite the doubt that was stacked against it when it was first announced.  It’s been a pretty wild ride so far, but now one has to wonder whether or not the Dynamic Duo of Scott Snyder and Greg Capullo will be capable of ending such an ambitious story with the bang it needs to solidify it as the classic it has the potential to be. 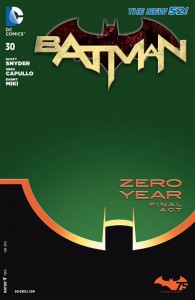 We open several weeks after the events of Batman #29, with Bruce waking up from a coma in the apartment of one of Gotham’s good-hearted citizens. This is startling enough for the young hero, but what’s worse is what he sees when he first takes a look out the window. The city is in ruins; streets are now overgrown thanks to the plant growth formula stolen from Dr. Isley, death traps that are meant to keep residents from leaving the city surround the devastated metropolis, and the Riddler has become the obnoxious overlord of Bruce’s once proud home.  It appears the still green Batman will be facing his toughest challenge yet.

Ambition has never been a trait that Scott Snyder lacked, as seen in basically everything else he’s done in this title since the launch of the New 52, and it’s certainly evident in this issue.  Just take one look at Greg Capullo’s beautifully rendered double-page spread of the crippled Gotham city, and it’s pretty clear that they’re swinging for the fences in this final act.  Whether or not this particular plot choice (to have Gotham turned into a post-apocalyptic looking wasteland by the brilliant and crazed Riddler) will pay off is a mystery, however. While it does have some clever characteristics that set it apart, it still feels kind of similar to other Batman stories like “No Man’s Land” or even the final Nolan Bat-flick.  And you have to question whether it’s a good idea to raise the stakes so high in a prequel story where you know who and what are destined to survive.

What makes these problems easier to forget is the fact that Batman #30 is a damn good piece of comic book storytelling.  The pacing is perfect, easing us gently enough into Gotham’s new reality so that it’s not too abrupt but still pretty jaw-dropping.  Jim Gordon’s scenes, especially in the final pages, are delightfully tense and exciting.  And the Riddler, a character that resided in the gutter of Batman’s Rogues Gallery not that long ago, is finally getting the level of writing he deserves.  It might have its hiccups, but it’s still a stellar beginning of the end for this awesome Batman event.

Buy It – While it does feel a bit familiar at times, Batman #30 is still a very exciting and entertaining read.  It’s also a promising start to “Zero Year”’s finale, an end that will surely blow the socks off of Batfans everywhere.