This week we get to see Agents Garrett and Ward do some serious mustache twirling, Agent Coulson has a bit of a breakdown, The Fridge doesn’t look like you think it would, and Patton Oswalt! Let’s get to it. 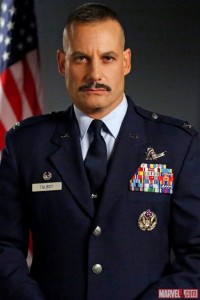 To begin, we see Raina, aka the girl in the flower dress, locked in a cell somewhere, folding paper flowers. Soon there is a commotion outside and in steps Agent Ward, who gives her a nice flower dress to wear, “courtesy of The Clairvoyant.” Next thing we know they are in Havana, Cuba, where they meet Agent Garrett, who is getting an old timey barbershop shave. Raina is seriously disappointed that Garrett is just a guy who doesn’t actually have any powers, but he is also a seriously creepy guy, so she tries to keep a lid on it. Back at the Hub, Coulson is trying to put the pieces of SHIELD back together as Fitz, Simmons, and Triplett try to put the plane back together. Soon enough, Coulson gets a call from Col. Glenn Talbot, who sounds like he’s ready to put every SHIELD agent in the ground and sort the rest out later. Coulson decides he doesn’t want to stick around to see how that plays out, so he initiates “Odyssey Protocol,” which I guess just means that they leave without telling anyone. Before they leave, Coulson takes an inventory of what they have, which is basically not-really-all-that-much, and then goes to talk to Skye. He tells her to wipe them out of all official records, to which she replies that if she does that, there is no turning back, and then utters tonight’s official hashtag line “We’ll be Agents of Nothing.”

Garrett and Ward decide to raid The Fridge, which is a giant building improbably situated on a shore line and looks like something out of either Doctor Who or Mission: Impossible. Unfortunately, it’s a lot easier to get into The Fridge than it is to get into a building in Mission: Impossible. Once inside, Garrett and Ward wreak havoc and start stealing all of the stuff that was supposed to be either disposed of or shot into space. #ThanksFury. 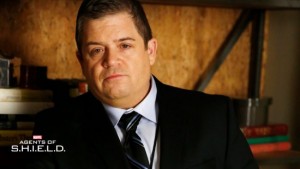 After collecting all of the SHIELD badges from the crew, Coulson notices that his badge suddenly has a secret set of coordinates lit up on its face. He decides that this has to be a message from Fury, and no one can tell him differently. They steer the plane in the direction of the coordinates and end up in a snowy forrest in Canada. Despite a rousing speech from Coulson about how they don’t have to join him, they all do anyway, and then immediately start to question his sanity. They find the coordinates, and when it seems like nothing is there, Coulson kinda loses it, and Clark Gregg gets one of the best speeches of the whole series. Of course, his little fit reveals what they are there for, which is a secret base–so secret it doesn’t have a name. It’s also staffed only by Patton Oswalt, who gets to bring some funny into the episode. Finally, Ward joins them with his own agenda and things take a turn for the sinister.

Providence was another solid episode from the SHIELD team. My only problem with it was that it follows so closely from last week’s episode that they’re starting to run together–like one story cut into little bits. It was good to have Ruth Negga back as Raina, and Bill Paxton does some of his best scene chewing so far as the newly minted villain version of Agent Garrett. Even Agent Ward was better in this episode–allowed to step out and be a bad guy. I’m still not sure if he’s doing some kind of double-double agent thing, but it’s looking less and less likely. But all around the episode was very well acted. It did seem like Patton Oswalt’s Agent Koenig was a bit too jokey for the tone of the episode, but if you take into account that they guy has been in that secret base since the third act of Avengers, it makes some sense that he’s a little loopy.

On a programming note, it was strange to me that this episode aired later than the show is normally on. I understand the desire to replay last week’s show in order to catch people up, but it just seemed odd to move the show now that people seem more interested. Of course, there have been a lot of odd moves during this first season of SHIELD, and they seem to be paying off–trying to maximize the viewers when they have them. Also, the episode was supposed to air with a “special sneak peek” of Guardians of the Galaxy, which really was just the trailer we’ve already seen with a couple of small interviews with the cast. No new information or footage. Kind of a bummer.

Looking ahead to next week, it looks like Skye will find out about Ward–but not before some more kissing goes on–and more Patton! Stay tuned!