Transition issues always have a tough role.  Moving the chains of story-telling from climax to climax, they are the unsung connective tissue that make the amazing moments of a tale stand out in contrast, but are just as necessary to get there.  So this week, as the Super-Family currently transitions into the Doomed crossover, Charles Soule and fill-in artist Paulo Siqueira get to take their shot at just such a chapter in Superman/Wonder Woman #7. 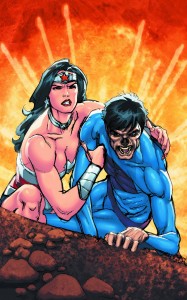 Resorting to extreme measures in their attempts to tackle the threat of Zod and Faora, Superman and Wonder Woman find themselves in dire physical straits.  Forced to retreat in order to heal their wounds, it is a rare moment of peace for the two juggernauts of the DCU.  But even as they continue to muddle through the fears and insecurities of their lives as a couple, an even greater threat looms on the horizon that could very well tear them apart (in an entirely literal sense).

I’ve been a rather big supporter of the Superman/Wonder Woman title in its short run to date.  Running a very thin tightrope, it has been exploring the relationship issues that these two characters could conceivably encounter, balancing it alongside personalized storylines that could possibly pose danger to the duo, all while using the above to create interconnected strands between the wildly diverse settings to build a more cohesive lived-in universe.  It’s a tough job on paper, but has been handled fairly eloquently in my opinion without losing its primary objective of being an entertaining read.  With this transition issue though, as it moves to position the book for the upcoming crossover event, some of the stress cracks of its multiple obligations are beginning to show.

This is not to say it is bad at all, merely serviceable, which is difficult to criticize in a non-nitpicking way.  For example, with the hasty transition, our cliffhanger from last month appears to have doubled as the climax of that plot thread; feeling rushed and unfulfilling even though the logic behind the quick jump is sound.  Additionally, while the character moments and dialogue between the two titular characters remains to be technically great, it quite obviously plays second fiddle to the shuffling of the chess pieces in order to get everything on the board that was needed for the upcoming storyline.  As gripey as my comments sound, and I fully admit that Soule’s consistently above-board performance to date may be coloring that perception, all of these minor problems work against this particular issue as they chip away at the aspects that have made it a fun read up to now.

In a similar vein, fill-in artist Paulo Siqueira does a splendid job of filling in for regular artist Tony Daniel this issue; but compounding his stylistic differences alongside the story issues above, it comes together to give an overall feeling of slightly off.  In costume, his gaunt and decimated Superman struggling to help is visually arresting, but as the characters take to plain clothes, their facial expressions and demeanor in the art seem to lose the crisp focus that made them pop out from the background in earlier pages.  I cannot be certain if this was an artistic choice, but it did not seem as appealing as the style he was able to show in the first half of the issue.  Again, I admit to nitpicking, but I have been trying to place my finger as to why this issue did not grab me as much as previous chapters, and the added sum of all of these smaller issues seem to be all I can place it on.

Pass.  It’s not a technically bad issue, but instead acts as a bridge between the previous chapters and the upcoming crossover storyline.  As such, there isn’t much for a new reader to latch onto, while those who have been on since earlier issues may feel short-shifted as the buildup of the story thus far is quickly shifted elsewhere.