I have some good news and some bad news when it comes to Deadpool #27. Here’s the good: it’s a really fun read. This is probably the best put together anthology comic I’ve read in a good long time. It’s funny and it’s packed with great writing and great art. Here’s the bad news: the actual story of Deadpool getting married is a continuation from the Marvel Infinite Comics series Deadpool Gauntlet, not from the main Deadpool title. So it’s kind of out of the blue. And while they acknowledge this in the recap page of the book, I still felt like it was an odd choice to make, especially when this issue was a whopping $9.99. 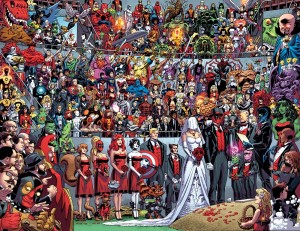 The main story of the book starts with Preston, Deadpool, and a SHIELD agent having a shootout with some Ultimatum thugs. Deadpool chooses this moment to tell his friends that he’s getting married. We get a brief introduction to his bride-to-be, Shiklah, who is some kind of monster/demon thing, and then Deadpool realizes that he needs an officiant. He runs down a pretty funny cast of characters until a newly returned Nightcrawler volunteers for the job. While getting ready for the wedding, The Merc With the Mouth has some wedding jitters, but then, after a couple of great sight gags, he gets to the park on time. The wedding itself is actually kind of touching, and then on to the reception, where there is just enough time to get in a few more jokes before the end. There is one last scene with Ultimatum where they vow to get back at Deadpool through his loved ones, and then we’re done.

The rest of the book, which is probably about two-thirds, is a series of twelve backups, all written by Deadpool alums going back to his first appearance in 1991. Each story tells of a time when Deadpool was married, though most of them “don’t count” for one reason or another. As I said at the beginning, I’ve not seen a book with this many creators maintain such a high level of quality in a long time. All of the stories were either funny or strange enough to hold my attention, sometimes both. And, in nearly all of them, Deadpool really did have feelings for the person he was marrying, even if the person only existed in his head. I hate to use the word cute, but most of the stories were kinda cute. And manly. Yeah, very manly.

Most of the time, the thing that seems to suffer the most in a book like this is the art. Not so with Deadpool #27. While there were many creators on the title, the art stayed consistently good throughout, and even though the styles were from all over the history of comics, the whole book fit together quite nicely. Standouts for me were Dexter Soy and brilliant colors by Veronica Gandini on “So Deadpool Walks into a Bar…,” and Carlo Barberi with colors by Val Staples on “The Space Racist.” As I’ve said, though, great art all around.

Wait and see. It’s hard for me to recommend a ten dollar single issue to anyone, even with a Guiness World Record setting cover. But, If you are a Deadpool fan, especially a fan from the 90’s, I think you will find a lot to like in this issue. There is a part of me that believes it’s worth the money just because it’s a well-produced anthology book–something of a white whale–but I’m still annoyed by the way Duggan and Posehn have merged the story from Deadpool Gauntlet into this book. The completist in me now feels like he has to go back and read all of Gauntlet, but it’s thirteen $2.99 issues that I really can’t afford right now. Maybe there will be a collection. Until then, I will have to be content with Deadpool #27.