It’s been a long time coming: Marvel’s Ultimate Comics line essentially ended in October of last year, leading into the Cataclysm event, which wrapped up around the end of February. And now, here we are in early April, finally getting our hands on the All-New Ultimates #1. Unfortunately, the book really falls short of it’s potential. 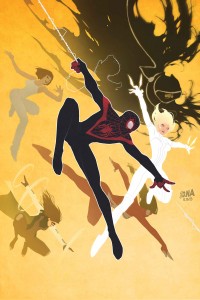 By all rights, this book should work, and in fact, we’ve seen this team work together very well in the pages of Ultimate Spider-Man. The story begins with a couple of super-powered muggers trying to rob Ganke, Miles Morales’s best friend, who is walking around Hell’s Kitchen for a really ridiculous reason. Cloak and Dagger come to his aid, at which point he apparently lets it slip that he’s Spider-Man’s best friend, because suddenly Web-Head shows up to console his friend. We get a brief interlude with a couple of cops raiding a lab, and then we get a whole bunch of exposition, courtesy of Jessica Drew addressing the All-New Ultimates, and then Jessica talking to Kitty Pryde in private. We find out that since SHIELD is no more, Roxxon–the evil corporation that gave several of these powered teens their abilities–no longer has government protection. Because of this, they have abandoned many of their more illegal activities, including a lab creating a substance to grant people powers derived from the stuff they gave Cloak and Dagger. Now the lab has been taken over by a local gang and things are getting ugly. The issue ends with the team surrounded by cops, and the cops surrounded by gang members. Oh, and Jessica Drew decides that she is no longer going to be Spider-Woman, but now she’s Black Widow. For, you know, reasons.

As I said, it should work. It’s a good team: we’ve seen them work well together before. The story isn’t terrible–though I would have liked to see something a bit more Ultimates worthy. But unfortunately, the book just can’t pull it together. FIrst, I think they spend way too much time on the lead up. The scene with Ganke at the beginning of the book is almost entirely unnecessary, and there are more than a couple of scenes afterward that could be shorter or cut entirely. The second and probably biggest problem is the dialog. Michel Fiffe’s characters try really hard to be witty and have snappy conversations with lots of personality, but instead they all sound just like each other–like one person playing ventriloquist for the whole world. This makes the dialog scenes, which I mentioned were already too long, even worse, because we have to wade through all of the jokey dialog to get to the point. Maybe it seems like a small complaint, only a fraction of the total whole of a comic, but the bad dialog betrays the characters, and what are we here for if not for them?

Amilcar Pinna’s art is not necessarily part of the problem with the book, but it’s not part of the solution either. There are moments during fight scenes and action scenes where he seems to shine–where he lets himself bend the rules a bit. Unfortunately, he doesn’t do as well with the dialog heavy scenes, of which I’ve already said the book has too many of. Pinna’s faces just can’t hold up under that kind of scrutiny. Also, I don’t quite understand the color palette of this book. The cover, which is awesome, features the characters all in white, red, and black on a yellow background. Inside, the book uses a lot of purples and greens, and almost the whole thing is in cool colors. It just seems like an odd choice that I’m not sure works with the story.

Skip it. As much as it pains me to say this, All-New Ultimates just doesn’t work. I don’t know what happened between Marvel and the Ultimate Universe, but it really feels like the company has just given up on it. There are great ideas happening here, though, and there is so much potential for good stories, but until Marvel sees fit to put better creators on these books, I don’t see how they can survive. My only consolation is that Ultimate Spider-Man will still be under the pen of Brian Michael Bendis. Unfortunately, All-New Ultimates just wasn’t so lucky.