I loves me some Doop. Granted, I am a late initiate to the teachings of Doop, but his appearances in the previous volume of Wolverine and the X-Men were among my favorite issues of that series. Even if he only appeared in a panel or two, it always brought the book up for me. Even so, I have to say that I was worried when I heard that he was getting his own series. So often, the joy of a character is the enigma that surrounds him/her. And then, when someone tries to explain that enigma, it takes all of the fun out if it. I was glad to learn that Doop was going to be a limited series, which would hopefully take away some of the pressure to tell a large story with such a strange character, but I was still worried. Well, now the book is here, and while I liked it, I’m still not sure what to think about it. 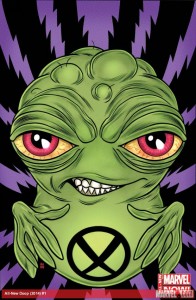 The story begins with Doop in his room, writing a letter. Before long, his alarm clock–which looks like Cyclops’s head–goes off, saying, “Hi there, Kitty,” over and over and over again. We also have a friendly narrator, The Spirit of the Margins, who breaks in occasionally to talk about Doop and the life of a “marginal character.” As a marginal character, Doop has the ability to weave in and out of stories, popping up in places where he’s needed. He can also pop in and deliver a letter to Kitty Pryde, for example. Which he does. The story that Doop is winding his way through is Battle of the Atom, and after delivering his message to Kitty, he pops up in several more places to provide video, moral, or mechanical support. Finally, he pops back in on Kitty, who hasn’t had a chance to read the letter yet. It’s not quite what you might think it is–or it’s exactly what you think it is. Either way, Kitty refuses, at which point Doop alters himself in such a way as to make himself seem more eligible, and then the book ends, leaving us to ponder the implications of his change.

In many ways, the story is perfect for the character. It’s small enough and not at all out of character for a little oddity like Doop. I have to keep reminding myself that Peter Milligan is the writer who created Doop–along with artist Mike Allred–and that the little guy should be in perfect hands. I’m really at a loss as to what to expect for the rest of this series, however. I’m not sure that the story of Doop trying to win over Kitty is enough to hold my attention, even for five issues. But there really isn’t an implication that there will be much else going on. I will still be picking up issue two, if for nothing else than just my love of the character, but I can only hope there will be more to the story than this little, hopeless romantic performing feats for an unwilling subject. Maybe I just don’t want to see Doop go out that way.

David Lafuente does some great art work here, bridging the gap between an expressive and funny little green blob and the full blown X-Men, some from different times. He does a good job of recreating panels from various points in Battle of the Atom while also keeping the focus on little Doop as he goes about his business of being the X-Men’s all around behind-the-scenes guy. I was also glad to see that Laura Allred–Mike’s wife and long time collaborator–was doing colors on this issue, which were vibrant and fun while still in keeping with the tone of the story where they needed to be.

Wait and See. If you are a Doop fan–or even a Kitty Pryde fan–you should go ahead and grab this one. I will not, however, blame you if you wait for the collected edition. I think All-New Doop will be a cute little story to satisfy our Doop cravings, but I also think a little bit of Doop goes a long way. As a graphic novel, this will be a fun gift for the X-Men fan in your life who needs a little humor to go along with the melodrama, but after that it might be something to pull out every couple of years and go, “Hey, I remember that guy.” Let’s hope that issue two raises the stakes a bit.