So here it is: the first of the final six episodes of Agents of SHIELD season 1, and the first episode after the Marvel Cinematic Universe was rocked by events in Captain America: The Winter Soldier. SHIELD is in total chaos, everyone is turning against everyone and no one knows who to trust. But out of this civil war comes something even more amazing than the uncanny cross-over from film to TV: Agents of SHIELD suddenly feels whole. The show has always been building to this fight, and now that it’s here, it feels like the pieces are finally slipping into place. 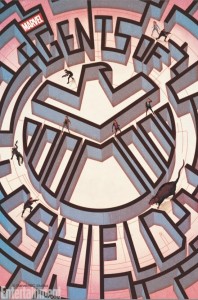 Knowing what I know about Captain America: The Winter Soldier and how is was supposed to effect Agents of SHIELD, I couldn’t help but give a hearty laugh when Don’t Fear the Reaper began playing over the fade in. From that moment on, however, we are in the thick of it. Agent Garrett is almost shot down by two SHIELD drones, at which point he contacts Coulson to find out what the heck is going on. Back on the bus, things are just as we left them last week–with everyone yelling and pointing guns at each other. We find out that May was using her encrypted call line to talk to Director Fury himself to report on Coulson’s condition. Meanwhile, Skye has figured out that there is an encrypted signal repeating on all SHIELD communication frequencies, and it’s a call to arms. I’m not going to say to whom the call goes out, but we will just say that a secret organization has infiltrated SHIELD. Coulson tries to get May to use her special phone to call Fury so that he can talk to the man with the plan, but they find out that Fury is dead. If you have seen Captain America 2, you now have a point of reference to synch up this episode with the movie. While all of this is happening, Simmons is still at the Hub, with only Agent Triplett to keep her safe. And, of course, because of everything that’s going on, we just don’t know who to trust.

There is a reason why this episode is called Turn, Turn, Turn. The rest of the episode is pretty much just one twist after another as the team try to rescue Simmons, infiltrate SHIELD, and take down the bad guys. I can’t say much else without spilling the beans, but I have to say that this might have been my favorite episode of Agents of SHIELD so far. The tension that they created–almost literally casting every character into suspicion at some point or another–was exciting and also a little terrifying. I myself had several theories about how the plot would unfold and who the traitors would be, and while I wasn’t entirely wrong, I was pretty far from right. And yet, at the same time, the twists and reveals didn’t seem out of the blue or out of character. It all played out in a very satisfying way.

By the end of the episode, Agent Hand makes a comment that synchs the episode back to Captain America 2, so that you realize that all of the events in Agents of SHIELD took place over the same timeline as the movie. I loved this, because it got everything out of the way quickly and efficiently, and now we have five more episodes of nothing but aftermath and fallout. Next week looks like it will deal a lot with the final twist of this episode, which wasn’t necessarily unexpected, but also may not be a real thing. We could be in for a double double bluff there. But, only time will tell.

Watch it. This is what the whole season of Agents of SHIELD has been leading to, and it’s all finally starting to make sense. There are things mentioned this week that happened in the second episode of the show, and I felt myself having a bit of an “Ah ha!” moment as I realized that not only has SHIELD been connected to the Marvel Cinematic Universe, but to itself all this time. This week’s show might be the last good jumping on point until the season is over, so, if you haven’t yet, jump in already. You might actually have some fun.