Here’s the thing about a medium: it’s really just a kind of canvas. What gets put on it is entirely up to the artists who are making the art. That’s why you hear us talk so much about “what comics can be.” The term comic book has always–in this country anyway–been synonymous with superheroes, but the medium itself was never restricted to that. In my mind, it’s almost sad that a book like Pretty Deadly ends up getting  lumped together with the likes of Marvel and DC’s stable of prime licensed characters. But, I’m sure that the same has been said of art films and literary novels and high concept comics for hundreds of years. The truth of it is, though, that Pretty Deadly is something so entirely different than anything else that to talk about it in the same week as I talk about the latest Marvel or DC number ones or what Deadpool is doing this week is almost a shame. But it is also my great pleasure. 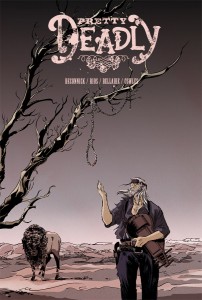 Pretty Deadly is not an easy read. There are layers of metaphor blanketed on top of dueling genres like The Western and The Fairy Tale that all work together in a very delicate and almost unseen way. I also realized while reading issue five that of all the characters in the book, we only get the story of a couple. Issue #5 is the end of the first volume of Pretty Deadly, and as such it it the end of the story of Mason, also known as Fox, and Sissy, the girl with the vulture crown. We have also been given a good chunk of the story of Death Face Ginny. But that’s it. Johnny Coyote, Big Alice, Sarah, Death, and Molly Raven all have lives and stories that reach far beyond the boundaries of this volume. I imagine that Kelly Sue has notebooks full of back story and detail on all of these players that will never see the light of day, but it can be felt keenly in the story itself.

There really isn’t much to tell about issue five that is not some kind of spoiler if you haven’t been reading, or something inevitable and satisfying if you have. Therefore, I’m not going to talk about the plot. What you want to know if you are reading this is whether this story is worth reading, and the answer is a resounding yes. I will say, however, that it should be read all together. I’ve been keeping up with the book as it’s been coming out and I still had to go back and read the whole run to feel like I really understood. Not that I mind: it was a joyous experience to read the whole story again. But don’t feel bad if you are compelled to wait for the trade on this one. It will be beautiful and perfect as a collected volume–I’d like it even more if it was some kind of oversized/ large format hard cover.

The reason I want it bigger is to better enjoy the amazing art of Emma Rios. She’s really outdone herself with issue five, where several pages take on an epic, flowing construction that doesn’t have panels, and yet suggests panels. And, the final, high-noon-style gunfight with Death is absolutely awesome all the way to the bloody ending. Of course, Jordie Bellaire delivers spectacular colors once again, on the one hand grounding the whole story with reality while also making it that much more fantastic. There are pages in this book that should be started at and admired for long periods of time, and which also serve to solidify Pretty Deadly as comic book elite–not an outcast of the medium, but an exemplar.

Buy it. When I was a teenager, I remember very vividly the time when I moved away from X-Men and Justice League and started looking for something else. For me, the book was Moonshadow, but Pretty Deadly could very easily be that book for someone now. This is the kind of comic that changes peoples’ minds about comics. Read it for yourself in whatever your chosen format, but consider giving it to a friend who maybe doesn’t get it yet. There will be a Pretty Deadly volume 2 and Death Face Ginny will return, but for now I want to just let the greatness of this first volume wash over me and sink in. Pick it up and enjoy for yourself.