I feel like I should care more about The Inhumans, Inhumanity, and Inhuman more than I do. I feel like I’m missing something, and that, if I just keep reading, or if I go back and reread Infinity or some of the Inhumanity tie-ins that it will all suddenly click. But it hasn’t yet. I don’t even know what to do with the little information I have: is this an event? Is it the new status quo for Marvel? Is it just another new number one for All-New Marvel Now. Unfortunately, now that we finally have Inhuman, I don’t feel like any of my questions are definitively answered, and worse, I still haven’t found a reason to care. 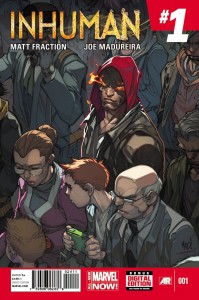 There are three major story threads in Inhuman that end up crashing together by the end of the issue. Unfortunately, where one story breaks to give us a glimpse into the next feels poorly planned, sometimes inserting a single page of one story into the middle of the action in another, and the third thread doesn’t even start until the middle of the book. First we have the Inhuman Lash, who is from a tribe of Inhumans apart from Black Bolt’s former Attilan. He sees the detonation of the terrigen bomb as an abomination since his tribe believes that the terrigen evolution is a privilege to be earned, not necessarily a birthright. Lash is traveling around the world, overseeing some of the new Inhuman transformations, and if they are not worthy or do not go well, he is executing that person.

Meanwhile, Medusa is moping around Avengers tower, still seemingly frozen in place over the alleged death of her husband and her new role as ruler of all these new Inhumans. She receives a message that they have finally located Eldrac, The Door, which seems to be something between a piece of furniture and a very large dog. Eldrac, however, has the ability to teleport you to the place where you need to be–as opposed to the place where you want to be. Medusa intends to use this to find her husband. That’s not really what happens.

Last but not least we find Dante, who is a drummer living in Des Plaines, Illinois with his widowed sister and sick mother. He’s headed out the door for the night when the terrigen mists reach his little corner of the world and enacts the change in both him and his mother. Soon after, Lash arrives to explain that not everyone survives the transformation, and Dante’s mother has died. Also, it seems like the change doesn’t work on Dante until Lash tries to snuff him out, at which point Dante lights up like a campfire. Medusa appears and and protects Dante from Lash, at which point Lash disappears and Medusa tries to explain what’s going on.

Joe Madureira’s art in this issue is exquisite, kinetic, and just a joy to look at. Unfortunately, it’s very hard to call it a selling point. Joe Mad is notorious for having trouble keeping up with an ongoing title, and a quick internet search showed that he’s either off the book or taking a break as early as issue four. I wasn’t able to confirm that, but it tracks with other Madureira titles that I’ve followed. For this issue, however, his art is–as I said–gorgeous. And, the color work by Marte Gracia is every bit as good. Gracia manages to follow and enhance Madureira’s crazy, detailed line-work and add a wonderful depth to every panel with a variety of color palettes.

Wait and see. Joe Mad fans should pick this one up just to look at. Unfortunately, I just can’t find the story engaging enough to keep me hooked. As much as I admire Charles Soule for the volume of work he’s producing right now, I haven’t found much of his work  that I can connect with. It’s possible that the second issue of Inhuman will work better without so many separate stories, but I for one don’t think I can afford to stick around to find out.