It’s impossible to know, of course, what kind of planning and thought went into a book like Deadpool vs. Carnage, but from the very beginning–just from the title!–the whole endeavor feels like a D-list attempt at capitalizing on Cullen Bunn’s recent success with Deadpool mini-series. Dare I say that this might be the beginning of the end for Mr. Bunn and the Merc with the Mouth? I hope not, as I’ve enjoyed the previous minis, but if it has to go, I would rather it have gone with a bang than with the whimper that is Deadpool vs. Carnage. 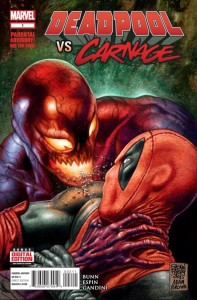 The story is that Carnage has escaped from prison and is hiding out in the heartland, and no one seems to know where. In his travels he’s murdered a couple dozen people, because, you know, impulse control issues. Cut to Deadpool sitting on the couch eating cereal when he starts receiving some kind of message from the universe that he should track down Carnage. After several more pages of him wandering around, waiting for the universe to give him signs, he seems to have some kind of revelation. The next thing we know, Cletus Kasady (Carnage in human form) is standing on his front porch in his tighty-whiteys while Deadpool tries to pop him with a rocket launcher. A fight ensues and the only thing that allows Carnage to keep his head is a third party who bursts onto the scene just in time to melt Deadpool’s face. To be continued… you know.

All-in-all, the story in the book isn’t horrible. It’s just not great, either. Deadpool and Carnage are supposed to play well off of each other because of their contrasting madnesses, but the dialog can’t live up to the hype. Also, while the whole idea of Deadpool following signs from the universe that lead him to Carnage is funny, the concept is pretty thin. I’m still not sure how Deadpool is supposed to have found the villain’s exact location when no one else in the world seem to be able to do it. But, if you don’t think about it too hard, it’s entertaining enough.

The art in Deadpool vs. Carnage is probably it’s biggest problem. Salva Espin does a good enough job with all the basics, and there is nothing in the issue that I can say is terrible. However, the way that he composes and choreographs his panels just doesn’t produce the dynamic quality that a book like this needs. Scenes with Carnage seem particularly flat, even when he’s fighting hand-to-hand with Deadpool. So what should be exciting and even a little scary becomes just a little… dull.

Skip it. It’s possible that the stars will realign and Bunn and Espin’s Deadpool vs. Carnage will pick up for the rest of the series and be great. But, if that’s the case, then you can grab the trade paperback–no harm no foul. As it stands, however, this series just doesn’t have the cleverness and the fun behind it that Bunn’s other Deadpool creations have. I know the very title is supposed to evoke some kind of Odd Couple like curiosity, but it feels to me more like a very poor excuse to slap $3.99 on the cover and ride out the fad until it’s dead and over.