Magneto has always been one the best examples of what a well thought out multi-dimensional villain looks like.  Unlike other baddies who sport backstories that are generally too farfetched to be believable, Max Eisenhardt’s past comes out of an all too real and terrifying part of our world’s history.  It’s not hard to see why he is who he is; in fact, it’s quite easy to see yourself reacting just as violently under such circumstances. 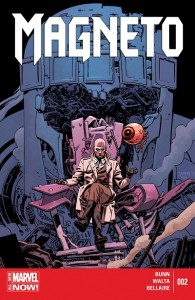 His layered characterization has resulted in many role changes since his creation. At times Magneto has been a monster, terrifying in his ruthlessness and cunning, and single-minded in his need for vengeance.  In other instances he’s been a Frank Castle-style anti-hero, willing to do what needs to be done to level the scales of justice.  In its impressive debut last issue, it looked as if we were going to be seeing more of the latter as we were introduced to a Magneto in the midst of a private crusade to bring mutant-killing criminals to justice.  With Magneto’s sophomore installment, however, it’s pretty evident that all those characteristics that make the Master of Magnetism one scary-ass mofo are still very present.

This issue centers around Eisenhardt’s visit to the shanty town camp that Colton, the kid who was housing the Omega Sentinel in the book’s last installment, called home.  Turns out the residents of the camp are being abducted one-by-one in the night and, unbeknownst to the rest of the inhabitants, are suffering the same fate as young Colton.  Magneto decides to set up shop and wait for the kidnappers to show up so that he can confront them for information (not to mention some bloody payback) all the while reflecting on his time spent in Nazi occupied Poland and the similarities he sees between its desperate people and the residents of the camp.

Series writer Cullen Bunn does a fantastic job in this issue of reminding us of the monstrous rage that boils just under the surface of Max Eisenhardt’s calm exterior, and the terrifying acts he is capable of doing.  He also gives us a glimpse as to where that bitter anger is coming from, thanks to the flashbacks we see of young Max in the Warsaw ghetto and one of his many encounters with the Nazis.  But the issue’s most chilling moment comes in a simple statement that Magneto makes while reflecting on the death of one of his childhood friends, a death that could just as easily been his own in that instance.  “Levi was sacrificed, like a lamb before a God,” he says. “So that I could live.”  There is a cold sense of vindication in this moment, an uncomfortable feeling that in Max’s mind he believes that he has the backing of fate in his actions.  He was meant to live, just like those who have fallen by his hand were meant to die.  Magneto is cast in a more paradoxical light than usual in that particular moment, displaying some of the same characteristics of the monsters that he’s trying to bring to justice.  It’s fantastic (not to mention quite promising) that Bunn is portraying Magneto this way, and it’ll be exciting to see which side of the man we get to see next.

Buy It – If you are a fan of the Master of Magnetism, or just interested in stories that feature characters who explore the grey areas of morality in a well thought-out way, than Magneto #2 is the book for you.