FacebookTwitterPinterest
Well, here we are again, with another exploration into the dim recesses of my library. This time out, in honor of Independence Day, I’ve selected what I feel are the most important stories in the long comics career of the Star-Spangled Avenger. 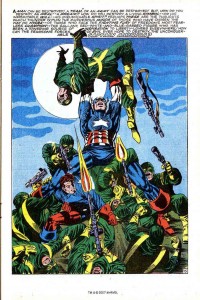 (Yes, Audrey, I know that this is very late for Independence Day, and yet still early for the new film’s release; I had inter-web issues; so if you don’t mind, I’d like to get back to our gentle readers. Sorry for the interruption, folks.)

Well, here we are again, with another exploration into the dim recesses of my library. This time out, in honor of Captain America: The Winter Soldier, I’ve selected what I feel are the most important stories in the long comics career of the Star-Spangled Avenger. 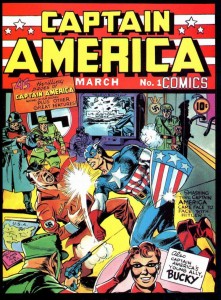 In chronological order, they are:

1)   Captain America #1 (3/41) Writer Joe Simon & artist Jack Kirby bring us the greatest patriotic character ever, who sold over one million copies a month during the war! (That’s the cover to the right, which you may recognize from its appearance in the film!)

3)  Avengers #4 (3/64) “Captain America Joins The Avengers” Fortunately, Stan would ignore (or forget!) the above brief revival, setting into motion the “man out of time” angle that would help define the character; but that lapse would cause other writers to go…hmmm.

4)  Tales of Suspense #79–#81 (7–9/66) “The Cosmic Cube Saga” Featuring the return of the Red Skull, and Cap’s first encounter with the Cosmic Cube, this tale, in a small way, was featured in the film Captain America: The First Avenger.

5)  Captain America #110-113 (2–5/69)  “Tomorrow You Live, Tonight I Die!” Written by Stan Lee, and with astounding art by Jim Steranko (Kirby in #112, though), Captain America dives to his certain death amid a torrent of Hydra bullets—or does he? Issue #113 features my favorite page of comics ever and which leads off this essay; a full-page shot of Cap overcoming the hordes of Hydra in a graveyard, with a caption by Stan that still serves as a character-defining moment. Simply amazing!

6)  Captain America #117–#119 (9–11/69) “The Coming of The Falcon” Stan Lee and artist Gene Colan introduce The Falcon, who aids Cap in yet another struggle against the Red Skull. The Falcon would become the well-deserved co-headliner of this book from issue #134 to #222! 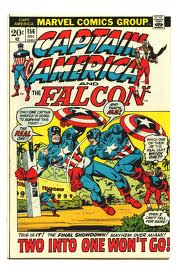 7)  Captain America #153–#156 (9–12/72) “The Cap of the 1950’s” Writer Steve Englehart, intrigued by the brief Cap revival of 1953, crafts one of the greatest ret-cons ever!  The U.S. government re-creates the super-soldier experiment, but unwittingly creates a rabid anti-communist and bigot, who they must put in suspended animation. Thawed out by a worker disgruntled by “liberal” politics, this Cap and his Bucky go on a hate-filled rampage, one that only the real Captain America and his partners Sharon and The Falcon can stop.

8)  Captain America #171-180 (3–12/74) “The Secret Empire”/”Nomad, the Man Without a Country” The conclusion of this epic of political intrigue regarding corruption at the highest level of American government would see a disillusioned Steve Rogers abandon his role as Cap, becoming The Nomad.

9)  Captain America #253–#254 (1–2/81) “Baron Blood” Writer Roger Stern and artist John Byrne would bring Cap to Great Britain and a re-union of sorts with war-time allies, and a bout with the supernatural. Frankly, the entirety of the Stern/Byrne run #247-255 is noteworthy, and thankfully collected in a TPB.

10) Captain America #1–#14 (1/05–4/06) Ed Brubaker and Steve Epting kick off this re-launched Captain America series with a thrill-packed tale featuring the return of the Red Skull and the Cosmic Cube, and if that’s not enough, the introduction of the Winter Soldier, to boot!

11) Captain America #25–#42 (4/07–11/08) “Death of Cap” Despite the fact that Captain America barely appears in this run by Brubaker & Epting, his absence re-defined the character for the modern age, as the world mourned the symbol of Liberty, and hoped for his return. 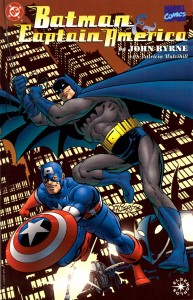 A wonderful Elseworlds tale by writer/artist John Byrne, this story takes place near the end of WWII, so it features Nazis, Sgt. Rock, The Joker and a “mystery” villain, and is just tons o’fun!

The “What If” piece, by Roy Thomas and Frank Robbins fixes another of Stan’s memory lapses, filling in the problem area of post-war Cap stories that was created by his death at the end of the war. The Annual takes this another delightful step further, with a “Cap Corps” story by J.M. Dematteis and artist Ron Wilson.

I hope you’ll take the time to find and read some of these, as Captain America is one of the greatest creations in comics history (Thanks Joe & Jack!), but one whose history of fine stories isn’t as well known as it deserves to be!

Here’s some bonus content! First is the intro to the Captain America segment from the 1966 daily Marvel Super-Heroes show:

This next needs no introduction I don’t believe…

…but this one might! It’s the trailer for the not-quite-released 1990 Captain America that starred Matt Salinger–the son of J.D. !

However, here is Cap’s first appearance on screen in a 1944 Republic Pictures serial: