In Guardians #13, the six-part mini-crossover The Trial of Jean Grey comes to a close. The conflict is resolved and everyone goes back to their little corner of space. And now that it’s over, I realize that the question of the story was never “Will they execute Jean Grey,” but instead, “What kind of impact will this have on the current Marvel Universe?” For Mr. Bendis, it seems, the mantra with the young X-Men from the past has been, “Go big or go home.” 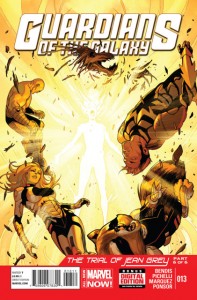 Issue #13 begins with a stand-off between Gladiator and Jean Grey, during which she tells him how it’s going to be. Jean has realized that what she might do as the Phoenix is horrible, and yet she has learned enough about the Phoenix to know that it is a force of nature and cannot really be stopped. And so, if they kill Jean, the Phoenix will naturally just find another host and the whole thing will happen anyway. Or will have. (Time travel: you can’t get it right in your head.) Unfortunately, at this point the great Gladiator is so hell-bent on proving he’s right, he won’t listen to anything else. But, unfortunately for him, Jean manifests a new power set and pretty much stomps him and the rest of the imperial guard almost single handedly. They realize that not only can they not beat her, but that she is manifesting new powers that the old Jean Grey never had, and thus is not the old Jean Grey. So, the Shi’ar decide to let the Guardians, the X-Men, and the Starjammers go.What’s interesting about this, however, is that Gladiator makes it very clear to the Guardians of the Galaxy that they have lost an important ally, and I think there is a time coming soon where the Guardians’ sins are going to come back to haunt them. The issue wraps up with everyone going home, some friendships are forged, a new flame is kindled, and one more surprising departure for the youngest X-men. Both of these books, All-New X-men and Guardians of the Galaxy, are going to be great to read going forward out of this crossover.

When Bendis is on he is really really on, and the Trial of Jean Grey is some of his best work on both of these titles to date. While Battle of the Atom was a bigger crossover with big implications, I feel like it fizzled out under the weight of itself. The Trial of Jean Grey has the benefit of being just short enough and yet bigger in scope than Battle that it ends up making a bigger impact using less real estate. And the unlikely pairing of the X-men and the Guardians turns out to be nearly perfect.

I honestly did not realize that the art in this book was shared between Sara Pitchelli and David Marquez until I went to write this review. It’s quite seemless from page to page. I’m starting to wonder if Pitchelli and Marquez are somehow melding into the same person. I’ll get back to you all on that. For the time being, however, the art in Guardians of the Galaxy is absolutely gorgeous. Pitchelli and Marquez have cultivated a wonderfully expressive and epic style in both Guardians and All-New X-Men, to the point where it’s hard it imagine either book without it. Not enough good can be said about Justin Ponsor’s colors here, also, which flow effortlessly from the browns and greens of the Shi’ar battlefield to the bright pink light effects of Jean’s new power to the blues and grays of space and the snow covered hideout back on Earth. Everything about this issue is nearly perfect.

Buy it. I would love to see this collected as a single volume at some point, but I’m not sure if that will happen since it’s a crossover. Regardless, the story is top-notch, the art is awesome, and the action is epic. What more could you want from a Big 2 book? Even better, this story makes me excited to keep reading both All-New X-men and Guardians of the Galaxy instead of wearing me out like so many other crossovers/events end up doing. This is Bendis, Pitchelli, Marquez and Ponsor at the top of their game, and you might just be missing out on something very special if you skip it.