Note: There’re a few substantial spoilers in this review.

Ever since it was announced that Brian Azzarello and Cliff Chiang would be ending their fantastic run on Wonder Woman this summer, each issue seems to have a new sense of urgency, not to mention tinges of the bittersweet.  It’s kind of like learning that one of your best friends is moving away and you’ll probably never see them again; you find yourself wondering where all the time you guys had together went and can feel the clock ticking away the minutes towards their departure.  Alright, maybe that’s a little dramatic, but I for one am really going to miss this creative team.  They made such an impact on this title, and they’ve done so by offering us issue after issue of quality storytelling. Wonder Woman #29 continues this streak. 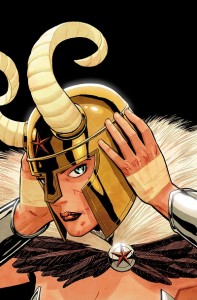 After last issue’s explosive ending, we find Diana, Artemis, and Hermes attempting to track down Cassandra and her prisoner Dionysus.  When they eventually catch up with them they find Mount Olympus devastated, the victim of the now free First Son and his horrible wrath.  Battle ensues and Wonder Woman is once again faced with the challenge of embracing her new title as the God of War.

There are a lot of things in this issue to get pumped about.  First Born, for instance, really steps the villainy up a whole other level to the point where he actually becomes pretty scary.  Cliff Chiang’s art shines in these moments, giving a horrific new look to the God that makes him look delightfully nightmarish.  It’s also great to be given a little more insight, however vague it might be, into the relationship between Artemis and her twin Apollo.  But certainly the best development in this issue comes in the way of Hera and her divine powers being restored.  Her arc as a character has been a joy to read, and it will be interesting to see whether or not she actually has turned over a new leaf now that she has her title back.

The only real negative thing that can be said about Wonder Woman #29 has to do with the pacing of it.  Certain events appear to develop a bit too quickly in this issue, not leaving enough time to let them play out the way they should.  The biggest example to be found here is the restoration of the Amazons on Paradise Island.  It’s great that they’re back, but all we see of their return is one page where Diana and her friends are teleported to her home and simply find everyone transformed back to their rightful bodies.  It was such a dramatic moment when Wonder Woman lost these sisters, so you’d think some care would be taken with bringing them back.  Maybe Azzarello is saving all of that emotion for the revival of Diana’s mother in a future issue, but until then it feels like a wasted moment.

Buy It – Other than a few pacing issues, this is another stellar issue of Wonder Woman, featuring some badass moments from Hera and First Son, as well as some surprising developments to boot.