Bring the noise! Daredevil is back!

I don’t have a lot of regrets when it comes to reading comics–especially since my “to read” pile now fills a short box. But, I do regret not getting in on Mark Waid’s Daredevil when I had the chance. I’ve read the first trade and picked up some scattered issues here and there, but being the terrible completist that I am I always felt like I needed the whole series in order to really get it. That’s what number one’s are for, though, right? 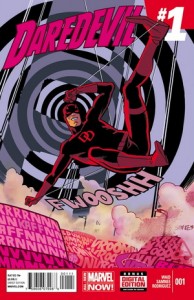 To be honest, I thought that this Daredevil renumber was one of the worst decisions in all of All-New Marvel Now. Why would you take a book that was doing well–with a loyal fan base and critical acclaim–and reset the numbering without even shaking up the creators? Well, I don’t know that I can say for sure that the decision was a good one, but I can say that the book was one heck of a lot of fun, and that they now have one more loyal fan.

Things are very different for this Daredevil than where I left him the last time I grabbed his book. First, this guy is out of the closet–everyone knows that Matt Murdock and Daredevil are one in the same. Seemingly because of that, Matt has moved from his Hell’s Kitchen to San Francisco. This is the one thing that really threw me about the book: what is Daredevil when you take him out of New York? If there are any characters who are bound to the city that never sleeps, Daredevil is king of them all. Fortunately, issue number one deals with that very problem, and deals with it in depth. Matt is having a hard time adjusting to his surroundings. A new city means new sounds, new smells, and new sensations that he must use to navigate while flipping around from rooftop to rooftop. And in San Francisco, the rooftops are much farther apart than he’s used to. This issue reminded me a lot of the last Mark Waid Daredevil #1, in which the hero has to stop a plot–this time a kidnapping–while also narrating talking about everything that he’s dealing with in a seemingly new life. The action in this issue is nail-bitingly great and I found myself most impressed with the Sherlockian level at which the Man Without Fear handles himself while on the job. I am definitely hooked for more.

My enthusiasm for this book rests heavily with Chris Samnee’s art, also. I’ve been a big fan of Samnee for a while now, and I’m overjoyed that I finally get to follow him on an ongoing series. And if it’s possible, his work has gotten even better. He’s obviously got a solid handle on the world of Daredevil, and he knows exactly when to get flashy with his page layouts, where to give us a panel of Matt’s radar vision, and where to just go all out on a full page splash. He’s created a perfect storm of simplicity and complexity that is fun, exciting, and emotional in equal measure. Also, not enough can be said about the near-pitch-perfect colors of Javier Rodriguez . I was a little thrown off in the first few pages because the color palette felt more like New York than San Fran, but once DD puts on the suit and heads out, Rodriguez really sets stage with California blue skies and bright, sunny pages.

Buy it. This is the chance you’ve been waiting for. If you missed the bus on Waid and Samnee’s Daredevil the last time it came around–like I did–you’ve been given a second chance. Don’t miss it. I see this book as  equally special in the Marvel U as Fraction and Aja’s Hawkeye, and just as much fun. If you were reading Daredevil before the break and the renumber, you have absolutely no reason to stop now. This is some seriously great stuff.