In The Dark is a horror anthology labor of love orchestrated by the lovely Rachel Deering, writer, letterer and editor. It was funded via Kickstarter, the $30, 000 goal surpassed for an impressive grand total of $75, 350. There were tons of exciting pledge rewards offered, but for review purposes, I’m going to focus on the book itself. The giant, hardcover novel is still in printing for those who pledged for the print copies; I also received the volume in digital form. I’ve been reading this thing all week, in every spare minute I could find and I’ve been so anxious to share it with you. 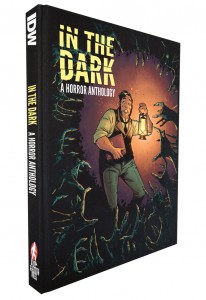 This anthology has such a long list of talented writers and artists that I think the best way to approach reviewing it is to spotlight a few of my favorite stories. There are over 20 original stories in this beast and an introduction by Scott Snyder (American Vampire, The Wake, Severed). The first thing that lit my eyeballs delightfully aflame were the endpapers of this book, crafted by Tradd Moore (Luther Strode, Deadpool). Three pages of intricately woven monsters and demons in blood red, black and grey greet you at the entrance to In The Dark. The first time I saw these illustrations, I immediately messaged Rachel Deering and declared that I want these pages, gigantic, on my walls. A gorgeous introduction to the art contained within.

The first story I want to talk about is The Unseen, written by Justin Jordan (Luther Strode, New Guardians) and art by Tyler Jenkins (Peter Panzerfaust). Callie Beckett was part of a group of friends who volunteered to participate in an experiment to unlock human perception. In a scene immediately reminiscent of the classic film Flatliners, the friends gather around and allow their genius pal to give them all mad scientist drugs that he claims will show them the “real reality”. As you may imagine, things go badly. The Unseen is not only about those things that go badly but also about the heartbreaking, long lasting effects of this experiment. This story was the first of many in the book to yank angrily at my heart strings, while also appealing to my love for science fiction.

All Things Through Me is a creepy tale of a psychic with extra special powers to help the dead finish their business with those who have wronged them. Written by Mike Oliveri (Deadliest of the Species, The Pack) and inked by Mike Henderson (Ghostbusters, Spider-Man), this one is gruesome and quick. There’s not a lot to it, but I loved the graphic portrayal of the “avenger” displaying his specialty.

One of my favorites is When The Rain Comes, from Steve Niles and Damien Worm.  Yes, I know, I am so biased on this one. But there’s good reason why I hardly ever have a bad thing to say about Niles and his recent teaming up with Damien Worm is a match with some magic. A father tells an incredibly solemn story of waiting for the water to rise; a local urban legend says that once it took the town and all it’s residents with it. The tension is high while the family waits and watches, the water coming ever closer to their porch. This is only the beginning of the fear, however, and when the water eventually recedes, something more horrifying and confusing than drowned neighbors reveals itself. Such a super cool story and the art in this is mesmerizing, like watching the whole story unfold through a dream.

There is so much insanely fun and scary stuff in this book, it’s just packed to the edges with goodness. A one-of-a-kind meal that bites back. The popular kid in school who makes everyone happy using Body Snatchers tricks. A man who falls in love with a murderous phantom and is willing to give everything  for her. A kidnapped child turns the tables on his abductor and shows his true self. Over 20 stories, each unique and well crafted; this is what you get with In The Dark.

Verdict: You should have already bought this book by supporting the Kickstarter, but if you missed that chance, get on the pre-order now. It’s a high quality buffet of horror delights. Reading this immediately made me nostalgic for the days of watching Tales From the Crypt, and that is a very good thing. You can order In The Dark through Diamond until the end of the month, or pre-order on Amazon.