“You don’t know what you got ’till it’s gone”.  There are few concepts that better represent this adage by way of lyric than that of family.  Infuriating, overbearing, and frustrating throughout the years; it’s often that we find ourselves unable to appreciate the very souls who are closest to us until we cannot see them again.  Today, as I read the final issue of Jeff Lemire’s run on Animal Man, it was a thought that sat at the forefront of my mind for many reasons.  From the aspect of losing a series I have enjoyed immensely to date, to the story matter of a family struggling to cling to one another even as loss has ripped them apart; it’s a phrase that rings true for fans of Animal Man and the entire Baker clan as this final tear-jerking issue brings their story to a close. 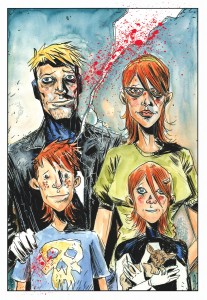 With the Red in shambles after an invasion by Brother Blood and his armies, Buddy Baker now has to navigate the delicate matter of restoring order to this primal place while extricating his family from the all too real dangers that his lifestyle exposes them to.  Even with challenges of this magnitude before him though, his focus is always on his wife and daughter, as the family continues to struggle through the mourning of a death within their ranks.  But will Buddy continue to hold secrets from his wife in his attempts to protect her?  And though his facade of strength remains, can anyone save this hero from his own internal strife?

*Yoink*  You know what that sound is?  That’s the sound of Mr. Lemire tugging on my heartstrings like a halyard line as he raises the sails to bring us to happier days.  As stated above, this entire run of Animal Man has been a snapshot of a normal family in fantastical situations, and it is through this delivery that these characters have taken on a life of their own for me each month.  It’s a tactic that has separated the title from the din of superheroics that surround it, and continues in that fashion all the way to its final panel to great effect.  For even as blood monsters, horrific nightmare creatures, and the battle for universal balance stomped through its pages, it was the plight of this family that took center stage each month, as they consistently struggled to make their way through these trials in one piece and created a compelling narrative because of it.

Lemire continues to show his talent in capturing this balance of fantastic and mundane in this final issue by dealing with the aftermath of his otherworldly war, but dedicates the majority of its pages to the aftereffects of all of these adventures on Buddy and his family.  A fairy tale that refuses to take the easy road out, it is through the dialogue that he is able to acknowledge issues such as grief, trust, and familial resolve in such limited real estate without making them feel glossed over.  A bold approach for a final issue, there is much it leaves open to the reader without anything close to a final resolution, but is still able to instill everything that we love, adore, and even fear about those who are closest to us in our own families.  While frustrating in its own right to leave them with so many unresolved issues between each other, it is one of the many little things that help cement the title as a living portrayal of the messy relationships of family.

As if I have not gushed enough praise, the artwork also brings another critical element to this final chapter.  With Travel Foreman completing the circuit just as the series began through his rough yet emotionally charged panels, it cannot be overstated how skilled he became during his tenure at giving these characters a feeling of life.  Faces that run the gamut from joyous to full of despair, it is this grounding that gives the tale its gravitas even as it gleefully crossed lines into the ridiculous.  This is demonstrated even more so when Lemire himself takes to the pencils in this final issue, showing those wild storybook moments in his own loose style without losing the emotional punch, while also shining a spotlight on the ‘more mundane’ panels of Foreman’s reality.  It’s a physical demonstration of the balance I spoke of earlier, and works on a level greater than the sum of its parts.

Buy!  Conditional though.  If you have been following these characters for a bit, this final issue of the series will be a great way to say your farewells as we step away from them for some time.  While not a firm ending in any sense of the word, it leaves the Baker family at a quiet moment of their lives, and it feels fulfilling as their tale comes to a close.  New readers who have not read previous issues will not find this last chapter as effective, but I highly recommend going back and giving this title a shot if any of the above sounds interesting to you.  Sadly, I have known what I’ve had for these last 2.5 years and will miss this title dearly now that it is gone.  But maybe, just maybe, we will live to see more of their adventures elsewhere as the Baker family tries to remain United in the future.