For this installment of From the Forums, I want to talk about recommendations. For whatever brought you to the Talking Comics Podcast, the fact is that we’re here to talk comics. And if there is anything a comic book lover is wont to do, it’s make recommendations. We’ve all got a thousand opinions, and every now and again we find someone who actually wants to hear them. On the other hand, though, as a comics lover myself, I’m always looking for something new to read, and I’d rather do it on the recommendation of another fan than stumble in blindly.

With all that said, let’s see what the Talking Comics forum members recommend this week.

In a conversation about East of West, the sci-fi epic from Image and Jonathan Hickman, bookend57 has this recommendation: “I’ve got #10 sitting in front of me right now, but haven’t opened it yet. I really like it, but it’s definitely a slow burn type thing, there’s a lot going on and only so many pages to get the story out. For people interested in starting this title I’d 100% recommend getting the trades. This book is a little tough going through with just the single monthly issue.”

Sometimes we go looking for recommendations, believe it or not. Here, CaptainInfinity is looking for some Marvel help after having spent a long time as a DC fan. Be sure to reply to his post if you’ve got any good ideas! “I’m already sold on the current/upcoming Cosmic offerings from Marvel (GotG, Nova, Silver Surfer, Cyclops…) but was wondering if anyone here has any suggestions for any further reading. Mostly I’m looking for any past storylines that appeared in non-Cosmic books as those are harder for me to search for.” 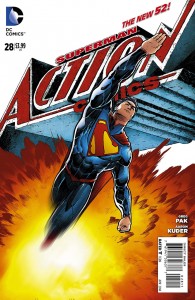 On the flip side, lukeman8610 is a Marvel fan looking for some help getting into DC. The resulting thread is a pretty great primer on what to read and why in the DC universe right now, but recently rcbtaw jumped in with this recommendation: “I would recommend Action Comics starting with 25. Great Superman story. I just read 29. Very moving depiction of Superman as the protector of the weak and misunderstood. His anger jumps off the page. Also, his powers are expertly depicted.”

To get a little obscure, CaptainSuperior recommends a French comic called Media Entity that is washing up on our virtual shores: “Hey guys, I wanted to recommend you guys give this digital comic a try. It’s actually a French comic that is being translated and made available on Comixology. The issues are only 99 cents each and the story is a mystery / conspiracy theory theme. I’ve read all 4 issues so far and can’t wait for the 5th. Here is a link to the French website to give you an overall idea of the mood of the comic. www.mediaentity.net“

How about you guys? What do you recommend? Video games, TV shows, comics, books, etc. What are you digging right now? Let me know in the comments!

This week we have three new members. I was hoping to be able to find a way to get a list of members with birthdays in March, but I can’t figure it out. If I do, I’ll post it next time. The most pulled books for the week of March 12th are: 1. Batman #29, 2. Hawkeye #17, 3. East of West #10 and Captain Marvel #1, 4. All-New X-Men #24, Fantastic Four #2, and Superior Spider-Man #29, and 5. Avengers Undercover #1 and Black Widow #4. One of these days I’m going to have to compare our most-pulled books to the monthly sales figures just for fun.

Anyway, that’s all for From the Forums for this week. I hope you all got a good idea or two of new books to read from this week’s post, but if not, go check out the forums. There are lots of great people there who would love to tell you what they love.