Maybe you know how much I’ve been looking forward to Avengers Undercover because you read any or all of my Avengers Arena reviews last year. Then again, maybe you didn’t. If so, the answer is a lot. Avengers Arena was the book that completely took me by surprise in 2013. And now I can say that Avengers Undercover is the same book as Arena, just the next story arc. The book felt familiar once I’d opened up to the first page, and while I have a couple of small problems, I am happy to say that Undercover is an unqualified success. 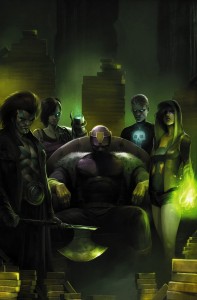 For anyone who may not have read Avengers Arena, fear not: the first page of Undercover gives you all the information you need to jump right in. I feel obligated, however, to tell you that you would be doing yourself a favor by picking up the trades of Arena and letting them take over your weekend. Great stuff; can’t say it enough. But, back to Undercover. After the recap, we spend a couple of pages each catching up with the survivors of Murder World. First is Hazmat, who has had her powers altered more than anyone else. She can now interact with the outside world, but when the outside world is talking about the events of your worst days like it was last season of Survivor, who would want to? After that we see Chase, who has decided to cruise the talk shows and make the most of his sudden fame sporting a mohawk and a wannabe attitude. Nico bursts onto the scene of his latest interview to berate him for selling out and breaking promises, and they have a little on-camera tiff before she finally teleports him away. Deathlocket is next, locked away in a SHIELD facility while they try to understand how she works. She meets a fan of the “show” and goes kinda PTSD on him before just about taking his head off with her arm cannon. Cammi jets off after attending an AA meeting with her mom, and then we finally get to the meat of the story. Bloodstone has gone full-on nuts. He’s taken to filming himself destroying buildings and other locations where he believes Arcade may be. He’s stalking known accomplices of the Carrot-Top-looking villain. He’s dropped out of school and he’s even got a room in his house that he’s converted to his crazy-den, complete with pictures and clippings and nutso graffiti all over the walls. Anachronism invites the rest of the gang to Bloodstone Manor where they find out that the young demon-child has jumped feet first into a known hideout of Baron Zemo’s, but not before turning himself into his monstrous counterpart. No one’s seen him since. Together, these young heroes who made it out of Arcade’s death trap together decide to go after their friend and try to save him, if they can. Unfortunately, they have no idea how difficult that’s really going to be.

Dennis Hopeless has brought me right back into this story, and it doesn’t feel like I’ve missed a day. Even though these characters have made it out of Murder World, you can tell that they are all still trapped there to some degree. The question for the rest of Avengers Undercover will be how trapped. I’m sure each of them will have a breaking point, and we get to watch and see it happen. Maybe that sounds a little morbid, but from what I know of this creative team, these characters, and this story, it’s definitely going to be a great time.

My major beef with this series right now is the covers. What made me pick up Avengers Arena was the off-the-wall covers that just stood out on the stands. Here, new team member Francesco Mattina is creating covers that are much darker, less inspired, and just less fun. Fortunately, Avengers Undercover gets Arena artist Kev Walker back for interiors and, if it’s possible, he’s only gotten better with these characters and this world. With that and Jean-Francois Beauleiu’s excellent colors, reading this book feels like putting on my favorite pair of sneakers that have just gotten a spit-shine.

Buy it. I said it with Avengers Arena, but this is the most amount of fun you can have with characters you probably didn’t know before. Hopeless once again nails the group dynamics that make this ragtag group of misfits work, and there can only be more fun, more thrills, and more surprises to come. Arena was the book that I always looked forward to reading every month, and Avengers Undercover has slipped right into place in my heart and in my hold slot.