Is there anyone better at sticking the landing than an acrobat?  With Kyle Higgins taking a final bow on his run of Nightwing, and the character itself preparing for a huge status quo shift following the events of Forever Evil, this issue had a feeling of finality hanging over it before it could even hit the shelves.  Fortunately for all though, and much like the mindset of Nightwing himself, this is not the time to wallow in one’s own misfortunes; as these final steps in the journey of creator and character together instead serve to inspire and celebrate while we say our fond farewells. 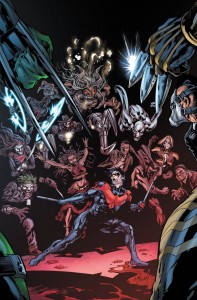 Dick Grayson has found himself embroiled in a reflection of his own tragic youth as the parents of a neighboring child are brutally murdered by Victor Zsasz in the streets of Chicago. With the young lady seeking vengeance on her own accord, Nightwing desperately races to stop her before more mistakes can be made.  But even if he could catch her in time, can he convince her that his options are better when his own life is in shambles around him?

From the brief descriptions of Nightwing I received before taking up comics, I had almost instantly written him off as a Diet Batman.  Same great storytelling taste, half the emotional gravitas.  A jaded dismissive approach, I know, but courtesy of Higgins’ most recent run, capped by this final issue, it is plain to see that this is a character who is infinitely different from his predecessor.  Driven not by an obsession for ridding the streets of crime, nor a blind quest for vengeance (facets we have explored in previous arcs); instead, his tenacity is tested with his unwavering resolve to prevent the darkness and tragedy that surrounds he and his extended family from consuming the very things that make him who he is.  Believing that everyone deserves the same, he is a defender of innocents and innocence alike.  The antithesis to the march of days, fighting not only the colorful villains of his time, but the ever creeping cynicism and despair that life itself can bring.  And in that regard alone, Higgins is able to spotlight his talent in his final chapter by convincing someone like myself, who believed Nightwing was Batman in a different can before reading his work, of all of the above.

Able to show the positivity that defines Dick Grayson while avoiding the flippancy that it could easily be labelled as, Higgins instead artfully displays that Nightwing is fully aware of how his life has turned out; and even more so by how it COULD have turned out.  Instead of using it to brood though, it is the wellspring of his desire to help others, and it colors all of the stories previous with that feeling of optimism even as we march into uncertain times in the life of Dick Grayson.  It is a joyous and respectful farewell, and the last two issues that make up this arc should make Higgins, as well as we readers, quite happy with how he left his time with the character.

Another great addition at the tail-end of this run has been the art of Russell Dautermann.  Dealing more in the quiet and emotional stories of friends and neighbors, his style has matched beautifully with the story being told.  It is easy to lose a readers attention when dealing with a deluge of these types of scenes, but he is able to breathe life into the dialogue through his use of staging and facial expressions, and keeps the momentum moving in an arena that could have easily killed the potency of the scenes as they take place.  I would be remiss to not mention some of the glorious splash pages in this particular issue though, as Nightwing ponders what has occurred and what could have been inside of stunning images that capture entire story arcs inside of a single page of images.  They are a sight to see, and I have a feeling some of the imagery utilized will be revisited in future days (should our titular hero live that long).  He made his mark in a short tenure, and I am quite interested to see where Dautermann ends up next after his showing in these last two issues.

Buy!  An emotional yet overwhelmingly optimistic issue that should turn any doubter of Nightwing’s individuality into a believer.  I am sad to see Higgins leaving now that he had found a great rhythm since moving the title to Chicago, but I would be hard-pressed to think of a stronger cap to his run than this issue.  And after sticking a similarly strong ending on his short-lived run with Deathstroke as well, it may turn out that Kyle Higgins is in fact an acrobat himself.