Coffin Hill was a breath of fresh air when it debuted back in December.  Writer Caitlin Kittredge showed great skill in her story pacing, building of atmosphere, and ability to shape the mystery surrounding Eve Coffin and her world.  The next couple of issues continued this streak, adding to the allure of the fresh new series, but it began to feel a little slow during the latter part of the arc.  Suddenly, there seemed to be minor holes popping up in the story; it wasn’t that certain developments didn’t make sense, it just felt like we were missing some key bit of information that would bring things into focus.  Coffin Hill #6, thankfully, rekindles some of the magic of those first installments.  It’s not a perfect issue, but it will remind you of the reasons why this title is so awesome. 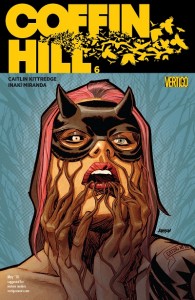 The issue opens with Eve confronting Dani’s stepfather, who is now in jail after the events of last issue, in an attempt to find the whereabouts of Bianca.  This encounter ends rather abruptly, not to mention bloodily, and Eve is forced to try and contact Dani’s spirit in a last ditch effort to get the information she needs.  Will she be able to get to Mel in time to stop the Harvest or will the wrong witch win the day?

Kittredge amps up the violence and creep-factors by a significant amount this issue, and gives the story the sense of urgency it needed to make this climax a memorable one.  It’s great to finally see Mel (or at least what used to be Mel) in her full monstrous form, delivering in full the conflict we’ve been itching to see between her and Eve.  Inaki Miranda’s art shines brightest in these moments, giving us some of the most exciting and terrifying visuals the titles has enjoyed so far.  The cliff-hanger ending felt a little rushed, but overall this is an exciting end to this promising book’s first arc.

Buy It – Coffin Hill #6 marks the conclusion of this introductory arc for the series, ending it on an exciting and bloody note that will make you pumped for what’s to come next in the title.