This week on Agents of SHIELD: Asgard comes to Earth, focus shifts back to May and Ward, and the Agents have one of their best episodes yet. 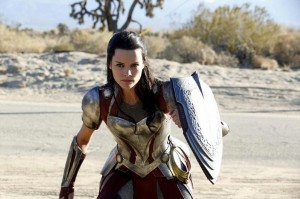 Yes Men begins much where last week left off. Lorelei has escaped the prisons of Asgard and fled to Earth, where she is wreaking havoc on the hearts of men. She manages to wrangle herself a biker gang somewhere in Arizona and is looking to cause a ruckus. Meanwhile, Agent Coulson is pulling all the strings he’s got and calling in every favor to try and find Nick Fury, who has apparently gone “off the grid.” Back on the bus, Skye is up and talking and trying to break out of her tiny recovery room, but Simmons won’t let her. There is a little Ward and Skye sexual tension before the group find out that they have been tasked with figuring out what is happening in Arizona. As the Black SUVs roll out, Lady Sif conveniently appears from out of the Bifrost right in front of the convoy and commences to explain everything we need to know about Lorelei, including the mcguffin they will use to stop her. She also mentions the Kree in a conversation with Coulson, which I personally thought was cool. The team has an encounter with the very Loki-like Lorelei and her biker gang, and Ward ends up under her thrall. She wants to go someplace that doesn’t look so much like Arizona, and so they head to Las Vegas. As Coulson, May, and the team try to find Ward, he and Lorelei have some berzerker sex on the top floor of a Vegas hotel and formulate plans for world domination. You know, like you do. Knowing that Sif and the gang are the only ones who can stop Lorelei, she and Ward take the fight to them by stealing plane, hypnotizing Fitz (who is like a 14 year old boy when it comes to women), and then fighting everyone. During the everyone fight, Sif has to exit the plane and then re-enter while in flight, Coulson gets some of his groove back, and May finds out that Ward wants someone else more than her. Things resolve much as you would expect: the mcguffin is affixed to Lorelei, Ward gets his ass beat by May, and things go pretty much back to where they were with just a little extra property damage. One of the major highlights of the episode is the moment when Coulson decides to tell Skye where her miracle drug really came from, and then vows to find out what the hell is going on no matter how many SHIELD rules he has to break. The episode ends with a new secret revealed, and the t-shirt worthy line “Coulson Knows.” 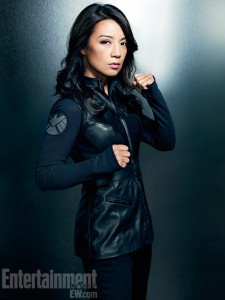 Yes Men was a very solid episode, with none of the same missteps that I bemoaned last week. The focus of the story was really May, who still is a bonafide ice queen, but is gaining a bit more depth. Baby steps. It was nice seeing Ward being a badass again, not as a soldier but more like a Jason-Bourne-level secret agent. I will say that some of the Asgard stuff got a little too Shakespearian for me, but by the end of the episode, it was clear that the melodrama was designed to highlight the more subtle drama happening among the Agents. The episode also shows how well Marvel has built their cinematic universe and how well Agents of SHIELD can interact with it. Much of the intel that the team uses comes from the Thor films and makes perfect sense that they would have it–no leaps in logic. There is even a really great scene between Sif and Coulson where they discuss the agent’s death and how Thor will react to know he’s alive. It’s all very well constructed and fun to watch.

Next week will be a bye-week for Agents, but in it’s place will be a special about the Marvel Cinematic universe, including some more footage for Captain America: The Winter Soldier, Guardians of the Galaxy, and a look at Avengers 2: Age of Ultron. It sounds like a good time. Looking ahead, there were some brief shots of the return of Deathlok–now with even more crazy robot parts than before.

As I said at the top, this might be Agents of SHIELD‘s best episode yet–definitely in the top five. This is all that the show can be and should be, and maybe should have been since the very beginning. The infusion of the wider Marvel universe was much needed and a Ward and May episode has been long overdue. The action was tight, the dialog didn’t over reach, and it’s just all the right kind of fun. Check it out on your favorite streaming service, and tune in next time as we talk more Agents of SHIELD!