Night of the Living Deadpool #4

“You can’t see me right now, but I’m pouring a shot of really nice bourbon onto an unmarked grave for the end of Night of the Living Deadpool. The series certainly hasn’t been my favorite of the recent Deadpool minis – that crown goes to Deadpool Kills Deadpool – but I will miss these amazing covers courtesy of Jay Shaw. They’ve all been wonderful and this #4 cover is a lovely way to cap the series. I hope to see more from him in the future.” -Steve Seigh

Art and Cover by Steve Epting

“You may or may not know this, but both Ms. Stephanie Cooke as well as myself are BIG fans of elaborate masks. Velvet is looking sharp, and quite dangerous on this cover, and I’m totally digging on the gold that sets off her look on this cover. Stylish and sexy times!” – Steve Seigh

“A woman’s work is never done. Insatiable lady lawyer by day, ass kicking Avenger by night … okay, sometimes during the day as well, but are we really going to split hairs here? I certainly hope not. Because I’ll tell you, I’ve got Jennifer on speed dial and she isn’t’ afraid to make house calls. Yeah, that’s right.” – Steve Seigh

Art and Cover by Toni Fejzula “The colors, Duke! The colors! I don’t know about you, but I don’t mind rats. Thanks to Gail Simone’s The Movement, and her character Mouse, I’ve come to be quite fond of the little disease vermin.  So of course I’m going to choose a cover that not only sports an army of the little critters, but that also colors them so gorgeously. It’s good stuff I tells ya!” – Steve Seigh “Often times I find that there is a high degree of beauty in comic book covers that embrace the idea of simplicity, and it’s in line with that attitude that I present to you this cover as one of my favorites of the week. I really dig the menacing vibe coming from Moon Knight’s vacant eyes and feel that the covers lack of color only helps to present as a bold and intense display of artistry.” – Steve Seigh

“I always love seeing Freddie Williams II cover art, but this dynamic image by Stephane Roux (whose work I adored on the lamentably-gone “Old 52” Zatanna) is a fine substitute!” – Bob Reyer

Art and Cover by Mike Norton

“This cover by Mike Norton will be giving me nightmares for weeks, particularly as the last time I caught a glance of my own visage reflected in the mirror looking mighty similar after coming in from shovelling snow!” – Bob Reyer

“I couldn’t decide which of these great covers to choose, so using my seniority, I picked both! I love the story-telling aspects of Kevin Wada’s, but there was no way that I couldn’t have the variant cover as part of this week’s column, because…AMANDA CONNER!!!” – Bob Reyer 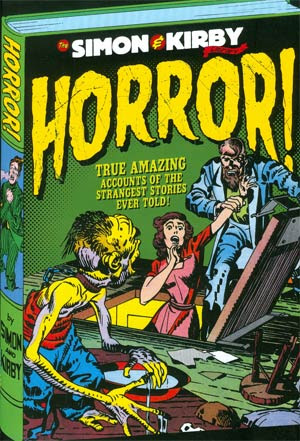 “Titan Books continues to bring us some of the finest reprint volumes, and this one collects the ultra-rare Simon & Kirby horror comics from the early Fifties that (according to Dr.Fredic Wertham and the House Committee on Juvenile Delinquency at least!) were helping to rot the souls of America’s youth! DO YOU DARE READ IT TO FIND OUT?” – Bob Reyer