Out March 5 from Titan Books is Simon & Kirby: Horror, the latest in their series of reprinted volumes of the seminal works of two of comics’ giants, Joe Simon and Jack Kirby, who as a team are most noted for creating Captain America for Martin Goodman’s Timely Comics, and their work on Sandman and Manhunter for National/DC, but their influence on today’s comic landscape is nearly incalculable! 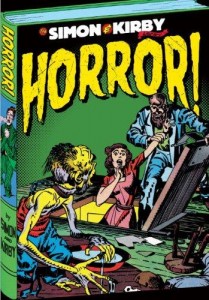 They spearheaded (if not created!) entire comics’ genres such as crime, westerns, romance, boys’ adventure, science fiction, and in this latest volume from Titan Books, Simon & Kirby: Horror, we are able to see their hand in the growth of that area through some rarely reprinted gems from the early 1950s Black Magic and  The Strange World of Your Dreams. Collected through the efforts of publisher Nick Landau and editor Steve Saffel, these stories have been lovingly restored to full glory by Harry Mendryk, surely looking better than they have at any point since leaving The King’s drawing board!

For some brief back-story here, horror elements had been present in many pulp magazines through the early years of the Golden Age, and comics would eventually follow suit, amazingly led by the folks at Classic Comics Illustrated with their adaptations of “Dr. Jekyll & Mr. Hyde” and “Frankenstein”. By the late-40s, titles such as ACG’s Adventures into the Unknown and Timely’s Marvel Tales would break the market open for an avalanche of terror, most notably the stunning early-50s achievements of the EC titles of Bill Gaines and his crew.

Undoubtedly, Crestwood/Prize Comics, who in 1940 had published Dick Briefer’s Frankenstein, wanted to cash in on this boom, and turned to Joe Simon and Jack Kirby. Now at this point in their careers, partners  Simon & Kirby were “packagers”; that is, they would create entire comic books for publishers, in this case Prize Comics to whom they delivered Black Magic and Strange World of Your Dreams. The books were a big hit, but other forces were at work in the form of Dr. Fredric Wertham and the Senate Sub-Committee on Juvenile Deliquency. 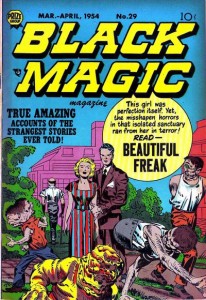 Black Magic #29 was held up for scorn during those hearings (and that story–see above– is reprinted here!), and the title would cease publication just before the institution of the Comics Code in 1954, and Simon & Kirby would devote their efforts to their own new company, Mainline Publications, which would only struggle along for a bit more itself. 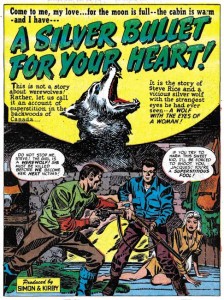 With the business aspect out of the way, let’s turn our focus to the wonders collected here! The stories collected here-in are less the tales of retribution that filled the EC books, but more on the order of the radio dramas such as “Inner Sanctum” or “Lights Out!”; dripping with atmosphere and wonderful characterizations, and the subjects run the gamut from domestic tales with a hint of the supernatural to straight-out witches, monsters, and other things that go bump in the night. Jack Kirby’s art is always a treat, and it is fascinating to see it here in a period between his bravura work on things like Captain America and the cosmic Marvel Age to come!

VERDICT: These stories have rarely seen the light of day over the years, and if so, it was without the care and attention to detail that the good folks at Titan Books have lavished on them here! If you’re at all a fan of classic terror tales (or needless to say, Jack “King” Kirby!) Simon & Kirby: Horror should be in your library!

The Best of Simon & Kirby

Sountrack (kinda): Here for your amusement is the introductory theme music for the 1966 Marvel Super-Heroes “Captain America”