Welcome back, Agents! And welcome back Agents of SHIELD! After almost a month away, our favorite Marvel TV show is back. As has become something of a tradition, this episode, titled T.A.H.I.T.I., is packed with emotion, guest stars, great effects, and everything else they could jam into an hour of TV. So, let’s get started! 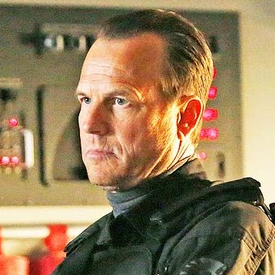 This episode begins not too long after the last one ended, with Skye on ice in a hyperbaric chamber in order to try and keep her alive long enough to get her medical attention. Simmons and Coulson drop her off at the hospital for some semi-graphic surgery and a scene or two of our heroes taking turns taking the blame for allowing Skye to get shot. Then, we find out that there is nothing more the doctor’s can do for Coulson’s favorite recruit. Of course, as the father figure on the plane, Coulson won’t accept that and starts calling in favors to try and get Skye the same miracle treatment that he got after “dying” in New York. In the process, he tells the whole team the secrets of his mysterious recovery and even lets Fitz and Simmons read the file in the hopes that they can replicate some of the mojo that will help their dying hacker. The team rushes off to some SHIELD medical facility, but they’ve been ordered to drop off their prisoner first–Mr. Ian Quinn, demonstrating some AMAZING bladder control. Coulson decides to keep Quinn, but it isn’t very long before SHIELD come to collect. Bill Paxton appears as the agent that everyone has worked with before, but while I expected him to have a contentious relationship with this unorthodox crew, he’s actually kinda nice and understanding, in a totally badass way. After a super cool scene in which Fitz and Simmons do some forensic accounting via a giant, holographic Finder window, the team head off to a super-secret location to find a drug that no one knows about that will supposedly save Skye. Agent Ward and Agent Garrett kick some ass at the facility and Coulson and Fitz find the miracle drug. Coulson stays behind and finds out some more scary stuff about his time under the knife, but not before they get the drug to Skye and she seems to make a recovery. The last five minutes of the episode feature an Asguardian woman named Lorelei wandering out of the desert and taking over the mind of a newlywed man who ends up leaving his new wife behind at a motel. We were then treated to a preview of next week’s episode featuring Lady Sif, who comes to Earth to retrieve Lorelei.

This episode features a good amount of time spent talking about whether all of this time and effort to save Skye is not only worth it, but in any way humane. The fact that two guards are killed during the break-in to find the wonder drug, however, makes all of that ring just a little false. I do find it refreshing, however, that the show does not seem to hinge entirely on the frustrating hoarding of secrets as so many shows do. Things come out pretty quickly, and I was pleasantly surprised when Clouson told the team everything he knew about his own secret. I find, though, that the show seems to be about rounding out Fitz, Simmons, and Skye as characters while allowing Ward and May to become more and more two-dimensional. The nerds carry the emotion while the muscle handles the one-liners and cliches. I don’t know that I mind it, I’m just saying that’s how I see it. I’m also very much on the fence about some of the show’s humor–they seem to be playing mostly for making fun of themselves and the history of Marvel than for any actual laughs. Pointing out that Deathlok sounds like a “wrestler from the 80s” can only resonate with a select portion of the population, and while it is funny, maybe it’s time to move on from the tongue-in-cheek self-awareness that nerd culture has come to use as a crutch.

T.A.H.I.T.I. was a solid Agents of SHIELD episode, so long as you don’t think about it too hard. Time will tell how it holds up once we learn some more of the secrets behind Skye’s past, but the fact is that there was some great action, awesome effects, Bill Paxton was pitch perfect as Agent Garrett, and Clark Gregg once again shows us why he’s the heart and soul of the Marvel Cinematic Universe. Yes, the morality may be a little flawed, but is it better to have ignored the questions altogether or to attempt to ask them and fall a little flat? I’ll leave that up to you readers to decide, but I would love to hear from you in the comments. What did you all think of the episode? Do you think Agent Triplett, Garrett’s right hand man, and Simmons with have a “thing”? What do you think “G.H.” stands for?