When I initially pitched the idea for From the Forums, I told Bobby that I wanted to periodically spotlight our members–taking an entire post to get to know some of the people who frequent our favorite conversation destination. I thought I would do the first one of these this week, and I want to start with our own Travis McCollum, otherwise known as xtjmac510x. 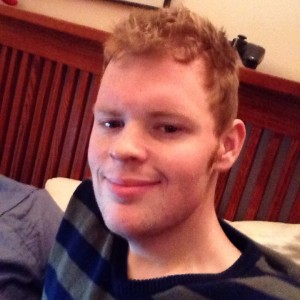 Travis is our one and only resident news man at Talking Comics, and also does a weekly column called TV Time. Just today he brought us joyous news of the new Arkham video game. He is also a near constant presence in the forums, as any of you members can attest. His sidelong smirk and curly red hair can be seen up and down threads all over the place. From video games to comics to music, he seems to have an opinion and some of the inside scoop on all of our favorite nerd-adjacent subjects.

Let’s take a look back at last week and see what he had to say about, well, whatever!

About NBC’s Hannibal:
“Bryan Fuller and David Slade are really doing wonders with that show. Aesthetically it’s one of the best on TV right now. And yeah, that intro, followed by the 12 weeks earlier reveal, really adds a ticking clock element to the whole season which I’m really intrigued by. And that new antagonist/serial killer? Super creepy.”

He’s also been quite active on the Pro Wrestling thread. Check out that conversation here.

He did quite well with his Oscar predictions. (Hope you had some money down on it, Travis!):
“From a numbers stand-point this was the best I’ve ever done at the Oscars. I went 22/24 with my only misses being Best Live Action Short (I guessed on that one) and Best Documentary (I really thought The Act of Killing had it in the bag given it won nearly every other major award). “

He is quite good at starting new threads with off-beat yet interesting topics, like this one:
“Anybody who plays video games can tell you that if a certain company/developers name is listed on the box, chances are we’re more inclined to get it over something else. Whether it’s out of nostalgia, a great track record of releases or something else only you can describe, we all have them. So what are some of your favorites? Least favorites? Let me know what you think.
My list of Favorite Companies/Developers:
Atlus
Quantic Dream
Namco Tales Studio
Square Enix (even despite some bad releases)
Monolith Productions
Ubisoft
Nintendo”
Feel free to join that conversation here.

And, as the last little tidbit I will put here, he has very generously posted a micro-review of the new Thief game in the video games category here:
“I just finished the game over the weekend and yeah…most of you aren’t missing anything. It’s a 6/10 at best. The stealth elements are really good and the gameplay is incredibly solid but the navigating outside of missions and the story/dialogue are a chore to sit through.”

That is all for this week and our Odin level forum-frequenter-slash-man-on-the-street, Travis McCollum. Feel free to follow his antics in the forums and please, check out the excellent work he does for us at Talking Comics. I think we should all get together in the comments and nag him to post some of his stand-up, too.

And stay tuned to From the Forum every week! Maybe the next time I feature a member, it will be you!