I don’t like saying that a comic is “not for everyone,” especially when I like it, because it makes me sound like some kind of elitist. However, when I enjoy a book as much as I did Pariah, I immediately start thinking about who I could share it with. And then, when I realize that no one else I know would like this book in the same way that I do, I have to come to the conclusion that this title isn’t for everyone. The art is sketchy and sometimes vague, the colors look like they were just splashed on, the story is about ten or so young adults trapped in an old space station–there are things here that would not appeal to everyone. That being said, I think Pariah is a great example of comic storytelling at it’s best, and I’m very interested to see what happens with these characters. 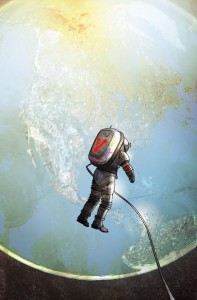 I have determined through several minutes of exhaustive research that Pariah #1 is the beginning of the second volume of this story. Volume One is currently available through Dark Horse as a graphic novel collecting the four issues of the previous volume. According to pariahonline.com, the series will be a total of 12 issues. Do not, however, be put off by the fact that this #1 is essentially a middle child. I was able to not only follow the story, but very much enjoy it without having read the previous volume. I definitely want to go back and pick it up, but I do not believe it is necessary to have read going in. What you need to know is this: the Earth that exists in Pariah is one in which we have created super-intelligent children via genetic manipulation in utero. These children, called Vitros, are eventually seen as a threat and somehow transported to an old, orbiting space station to seemingly live out their very short lives in relative discomfort. Issue #1 is told from the perspective of Herman Toulane, a relatively mellow vitro with some engineering background. We observe the other vitros through this eyes, some of whom are bossy, some of whom are cool, and some of whom are creepy (hint: it’s the math kids.) Herman gives us the perfect introduction into the reality that the vitros are facing right now while also providing just enough history to prop up the story.

Script writer Philip Gelatt does an excellent job of creating the voices of these characters and allowing them to inhabit the tiny space they have been given. If you’ve ever been in a classroom full of “smart” kids while the teacher is away, you will have an idea of how this story reads. The book manages to strike a near perfect balance between seemingly authentic dialog, exposition, character development, and plot that make for a complex story that seems oh so simple.

Artist Brett Weldele, whose previous credits include The Surrogates, has a unique style that, as I said before, might be a little off putting. It’s almost cartoonishly simple, but the great thing about cartoons is that they are able to convey emotion and action with an economy of lines. Weldele does a great job of showing what little space the characters have to work in, dealing with the zero gravity, and still letting his people emote without a lot of extra noise. He’s picked the perfect color palette for this book, also, as the mostly blue-grey panels help to sell the desolation and the isolation of the vitros in their current predicament.

Buy it. While it may not be for everyone, I would like to see everyone give Pariah a shot. I’m reading a lot of space-centric sci-fi comics right now, but nothing like Pariah. It seems so simple on the surface–just a bunch of characters all stuck in the same place–but I can guess that the road ahead will be neither simple nor safe.