After presenting us with a claustrophobic and terrifying story of doom met at the bottom of the ocean, Scott Snyder and Sean Murphy’s The Wake returns from the depths this week with a nightmarish vision of the future of humanity. 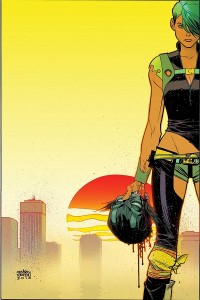 Fast-forwarding 200 years ahead of the events in part one of the mini-series, we meet a young hunter by the name of Leeward who is in the process of collecting some “Mer” heads.  It appears that the human race has found use for the noggins of the creatures who attacked them two centuries ago, or rather, the hallucinogenic fluid located in the creature’s skulls.  However, Leeward’s goal isn’t to get high, but rather to trade in the highly sought after substance for a piece of electronics that might help her increase the range of the radio she’s been building.  See, there’s a folk tale that the young woman is obsessed with, a story involving a long-lost signal being transmitted far off in some unknown area of the sea.  We are told little about the nature or purpose of the signal, but it may have something to do with stopping the Mer threat from succeeding in their goal of eliminating humanity from the face of the planet.

Scott Snyder does a tremendous job of fleshing out this introduction to the new world we find here in The Wake.  It has a similar feel to the setting of the film “Water World” but with sea monsters, better characters, and an interesting plot.  Visually, Sean Murphy’s art makes the transition from the dark and shadowy ocean floor to the sun-lit decay of the inland beautifully, emphasising society’s steady death-march back into the sea at the webbed-hands of the beasts that have been terrorizing them for so long.  It was easy to be slightly skeptical when it was announced that this mini-series was going to take such a dramatic turn, both in timeline and overall scope, but this creative team continues to do nothing but impress.

The only real negative point that can be made about this issue is that, because of its introductory nature, we don’t get as much meat plot-wise as you might like.  Time is spent getting the necessary information out of the way, establishing what has happened to the world and how it’s been reshaped.  As a result, it feels like the issue ends too abruptly, cutting the action short just when it starts to pick up.  It’s hard, though, to fault a book for doing what so many seem to have forgotten is the Golden Rule of serialized storytelling: leave them wanting more.

Buy It – If you loved the first half of The Wake but was worried that this second act would make the title fall of the rails, prepare to be pleasantly surprised.  Scott Snyder and Sean Murphy continue to weave a rich, captivating, and frightening sci-fi horror yarn that will almost certainly go down as a classic.