Caution: There are spoilers here for those who haven’t played the game yet.  Sorry!

I loved the newest Tomb Raider game.  I spent hours and hours playing it, collecting relics and stomping bad guys well after I had finished the main story.  A lot of aspects of the game held my skittish attention span: the engrossing world, the pieces of backstory meticulously planted through the island, and the incredibly fun gameplay mechanics being just a few of those factors.  But overall, it took me so long to put the game down because I really REALLY didn’t want to stop being Lara Croft.  Throughout the time I spent immersed in the game, I learned to trust my instincts, to find strength in myself, and to survive against the odds.  (Not to mention how satisfying it feels to hit a thug in the throat with an arrow 200 yards away, but I digress.)  I cannot think of a game I have played in a very long while that has gotten into my head quite like Tomb Raider did, and so I was naturally very excited to hear that they would be continuing her story in a comic series. 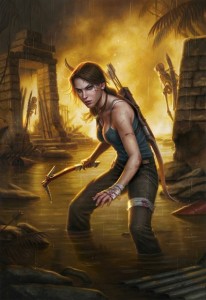 After blazing through Tomb Raider #1, I was happy to read in her brief afterward that writer Gail Simone had a similar experience to mine when playing the game, in that she very quickly found herself hooked.  “I was a skeptic,” she says in the piece, relating her long history with the original character and how she originally had no plans of playing the new incarnation.  In fact, when asked to write the comic series that would expand the game’s world, she had refused.  But after putting that skepticism aside and playing the game for herself, she soon realized that she needed to write this book.  And thank freaking goodness for that, because you’d be hard-put to think of a better writer to tackle this title.

Picking up after the events on the island of Yamatai, we find Lara and her friends still in shock after their encounter with the Solari cult.  Lara has been suffering from survivor’s guilt after the deaths of Roth, Grim, and Alex, and has been having some terrible dreams.  She learns that these nightmares are being shared by the rest of the survivors of their doomed expedition, and soon realizes that what she thought she had finished on that lost island may just only be beginning.

Simone captures the voices of Lara and her friends wonderfully in this first issue.  It’s fantastic when a writer’s love for the source material is as obvious as it is here.  What’s even more welcomed is that she wastes precious little time in the way of retelling the events of the game, allowing the action to take its course rather than being slowed down by a tiresome “Last Time on Tomb Raider” recap.  Yes, some might argue that this will hinder new readers who have no intention of playing the game, but any questions that someone might have can easily be answered by reading a plot synopsis on the interwebs.  Perhaps most exciting, though, is the potential that this title has.  Simone’s work is known for its deep characterization, psychological undertones, and action-packed storylines, all of which make for a perfect fit for Lara and her world.  To say it’ll be exciting to see what comes next in this book would be a huge understatement.

Buy It – If you enjoyed the game and have been longing to experience more of the adventures of badass Lara Croft, then Tomb Raider #1 is the book for you.