Sometimes the world gives us such wonderfully bizarre unexpected things.

Today Marvel announced an All-New Rocket Raccoon series to be written and drawn by the king of baby covers himself, Skottie Young. 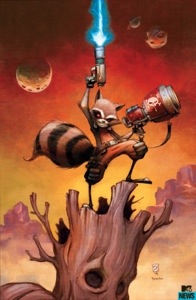 Marvel dropped the news over at MTV.com where you can see some uncolored art and an interview with Young himself. The writer/artist even gives a little insight into the tone of the new book.

“I think it’s going to have a connection to that nostalgic feeling for ‘Looney Tunes,’ that old animated flavor where everything wasn’t squeaky clean, you know? Daffy Duck would get his bill blasted off with double barrel shotguns… That’s what I grew up watching, and being able to play around with that in this hyper-superhero intergalactic universe will be a lot of fun.”

Marvel’s PR has a little bit to say as well:

“As defenders of the cosmos go, Rocket Raccoon has faced his fair share of galactic battles. He’s been a hero to the weak, a champion of good, a protector of the innocent, a heartthrob to the many intergalactic female species and now–a raccoon on the run?! ( I’m sorry, I’m sorry, a “formidable-and-expert-Guardian” on the run. Rocket is NOT a raccoon, okay?) Rocket’s high-flying life of adventure and heroism may soon be a thing of the past when he becomes a wanted man–and the authorities are not the only one on his TAIL! (We’ll definitely be overusing that pun!) Superstar creator Skottie Young brings his A-game as writer and artist on the series we’ve been waiting decades for.”

The series is set to drop in early July.

What do you all think? Are you ready to go on adventures with a foul mouthed raccoon? (Don’t tell him I called him that)