Episode One: Impressions and the story so far

Agents of Talking Comic Books! I have been tasked with providing you–our dear readers and listeners–with weekly reviews of our favorite Marvel TV show, Agents of SHIELD. There are only a few episodes left in the first season, but I will be here to talk all about them the day after they air.

Since the show has been on hiatus for the last couple of weeks, I thought I would spend this post talking about the show in general, my feelings about it, and a little bit about what we can expect as the season comes to a close. I want to talk about the show for those who either haven’t seen it or fell off after the first couple of episodes and haven’t watched it since. I think that everyone who is still skeptical should tune in for the last few episodes and see if your issues have been addressed or not. A lot’s happened since the season opener.

First, I want to briefly talk about the main characters. 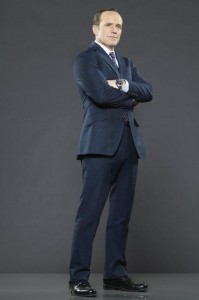 Agent Coulson. The man, the myth, the legend. Coulson is the heart and soul of Agents of SHIELD just as he was in the Iron Man films, the Avengers movie, and the rest of the Marvel cinematic universe. What Clark Gregg has accomplished with this character is truly wonderful and he is a joy to watch in the TV show as well as the movies.

A lot of mystery surrounds Coulson as to how he was able to “survive” after being apparently killed in the Avengers movie.

Agent Melinda May, aka “The Cavalry.” Ming Na-Wen plays the stoic to perfection, but sometimes I think she overdoes it. Some of the best moments in the show are all about how Agent May shows her feelings for the rest of the crew without actually showing any feelings.

She kicks some serious ass.

Agent Grant Ward. Ward is still a bit unlikable for me. In most situations, he’s the 007 wannabe. In the beginning of the show he was too “I work alone” and now he’s swung a bit too far the other way. However, his relationship with Fitz is where the character seems to come out of his shell and show some depth.

His friends with benefits relationship with May is also helping to round out his character. 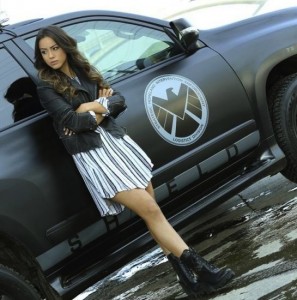 Skye. She’s had the farthest to come of any of the other characters in the show. As the rookie, she’s supposed to be our way into this world, but she hasn’t always been believable as a master hacker. That, and what seemed like a trite backstory was enough to put me off of her. But, as the episodes have ticked by and some things about Skye have come to light, she’s gotten more interesting.

Fitz. I could go on and on about the brilliance of how Fitz and Simmons work in the mechanics of Agents of SHIELD, but I’ll just say this: it’s brilliant. Most shows of this type have the obligatory “smart guy” slash “tech guy,” and we accept this as writ. However, if you’re anything like me, when that same character has to engineer a sophisticated piece of tech, hack a top-of-the-line security system, AND perform surgery on a member of the crew, it all seems a bit much. What SHIELD has done is to recognize that these are separate disciplines that require different skills, and thus created different characters to handle them in turn.

Oh yeah, and Fitz is great, too. The timid geek trying to be a man with a capital M.

Jemma Simmons. The other half of “Fitz-Simmons,” Jemma is the doctor on board and most at home behind a pair of giant goggles and holding test tubes. She’s everyone’s little sister, and yet she will be the one who will inevitably have each of the team’s lives in her hands at some point or another.

Now, for the show itself.

If you don’t know, the idea of the show is that the characters above make up a special team whose job it is to investigate strange occurrences all over the globe and deal with them before they become major threats. Many of these potential threats have to do with super-science gone wrong, and the agents spend a lot of their time chasing one particular organization that they call Centipede. (I wouldn’t be surprised if Centipede ended up actually being AIM or HYDRA at some point.) The operatives of Centipede are also quite keen to get to know our heroes better, especially Agent Coulson with his miraculous recovery/resurrection. Centipede is led by a character known only as The Clairvoyant, who we haven’t seen on screen yet.

If I can get into the background a bit, I find Agents of SHIELD quite fascinating from a production standpoint. The budget seems to be somewhere between your average TV show and a major Hollywood blockbuster, and the effects are much better than what you normally see on TV. The show is executive produced by Joss Whedon, and is written by his band of disciples who’ve followed him from Buffy to Angel to Firefly to Dollhouse and so on. What I find refreshing is that this group of writers who are now experienced with both wildly successful shows as well as shows that struggle to get even a single season finished are now experts in how and when to keep a secret. The mysteries that have been raised over the course of the show haven’t been kept until next season or some other time in the future, but are being dealt with now. With the fact that SHIELD’s first season is coming to it’s end and with no solid indication as to whether it will be renewed for a second season, it’s nice to know that the show won’t end without showing it’s cards.

From what I can tell (I honestly don’t understand TV ratings that well) SHIELD seems to be doing pretty well. The question with a show like this, however, is one of budget vs ratings: are enough people watching the show to justify the fact that it costs more to make. This is something we’re still waiting to hear. If you want an in-depth look at SHIELD’s ratings, CBR posted an analysis just today, taking into account the ratings of those who watch the show after the day it airs.

One of the funnest aspects of the show is the overlap it has with the Marvel cinematic universe. Obviously, Clark Gregg himself personifies this crossover as he’s played Agent Coulson in nearly all of the Marvel movies and now stars in SHIELD. That’s not all, though: characters often talk about the “battle of New York” referring of course to the events of the Avengers movie, and Chitauri tech plays a significant part on the show. After Thor: The Dark World was released, SHIELD had an Asgard-centric episode which referred directly to the events of the film, and rumor has it that Lady Sif herself will appear in a future episode.

At the same time, SHIELD also delves pretty deeply into the Marvel encyclopedia, pulling some of it’s villains and plot points from Marvel history. One episode features Dr. Franklin Hall, who will likely become the villain Graviton, who first appeared in comics in 1977. Also, a secondary recurring character has just been revealed as being Deathlok, the enigmatic cyborg whose appeared in Marvel comics since the 70s.

The Plot (possible spoilers ahead)

I’m just going to talk about the last few episodes, all of which you can watch on on-demand cable or Hulu, starting at the mid-season break over the holidays. In the episode The Bridge, Mike Peterson–antagonist of the pilot–returns, this time as a SHIELD agent who is learning to control his power. The episode ends with Coulson getting captured by Centipede and Mike, trying to save Phil, getting caught in a giant explosion. Then the series went on a month hiatus.

Agents of SHIELD returned in early January 2014 with the episode The Magical Place, and we see not only our team of heroes but all of SHIELD moving heaven and Earth to find Agent Coulson. The question that comes up on more than one occasion is why a clandestine organization like SHIELD would go through this much trouble to rescue one man. The fact that he’s a super nice guy just doesn’t seem to cover it. The team rescue Coulson through their now signature unorthodox methods, but not before the agent has the cobwebs cleared and actually remembers what happened to him after his death. The episode ends with Coulson confronting the doctor–played by Ron “Shepherd Book” Glass–who performed the horrifying surgery that brought him back to life, but we’re not quite sure yet what the Coulson will do with the information.

In Seeds, Fitz and Simmons return to The Academy to give a lecture and to investigate a strange death. We get a pretty fun glance into the life of the SHIELD Academy and it’s two halves–Science and Operations. We also, however, get some new information about Skye, whose motivation for becoming a SHIELD agent has been finding out about her parents. Of course, the answer she gets poses more questions than it answers. 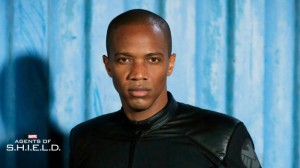 And finally, the episode T.R.A.C.K.S. gives us a Rashomon-like look at how the team attack a delivery being made by Centipede to an old rival, Ian Quinn. Most of the agents are rebuffed, but Skye and Fitz manage to track the target to it’s destination, only to find that Mike Peterson is still alive, but being controlled by Centipede via cybernetic implants, and that he is now part of the Deathlok project. The episode ends with Skye shot and bleeding out, nearly dead before she can be rescued by the team.

The next episode, T.A.H.I.T.I. airs on March 4th. I hope you’ve enjoyed my recap and I very much hope you will join me on March 5th to talk about the newest episode of Agents of SHIELD!