It has been a year of upheaval for The Fantastic Four. Writer Jonathan Hickman wrapped up his epic 5 year run, Matt Fraction, who started with so much promise, came and left the book before he could even get started, and Tom Breevort ended his record setting run as editor on the title. These departures threatened to leave the first family of Marvel in a state of flux.  But, uncertainty isn’t the way of big companies, so thanks to All-New Marvel Now, Leonard Kirk and recent DC expatriate James Robinson, we now have Fantastic Four #1 in our hands. 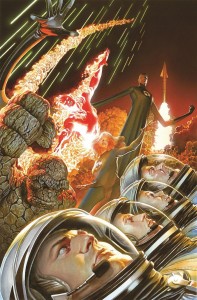 Writer James Robinson nails the tone of what a Fantastic Four book should be. From page one you can feel that this is a close knit family with a deep and rich past. Robinson also shines in the dark, foreboding and yet somehow also delicate narration he gives to Sue Storm. This voice over sets her up as the spine of the book, and taken on its own, it’s a perfect way to set up a number one issue.  There is also a moment when the children from the Future Foundation enter the fray, I won’t spoil it, but lets just say it involves a “Death by Chocolate Ray” , that is absolute magic.

Unfortunately, these special moments are interrupted by the book’s one overriding fault, its dialogue.  Every moment the characters should hold their tongues and let the art speak for itself, Robinson continually forces awkward phrasings and on the nose sentiments into their mouths. It weighs down the narrative and makes otherwise touching scenes fall flat.  The low point of the book sees Reed asking how Sue is doing because “She looked sad standing over there” It’s a completely unnecessary line because I can see the deep pain on her face thanks to the gorgeous art.

If there is one takeaway from this #1, it has to be the simply stunning work of Leonard Kirk. I’ve enjoyed Mr. Kirk’s work in the past, but to me the pages in Fantastic Four #1 are on an entirely different level.  His rendering of the team, from Ben Grim’s craggy exterior, to Johnny’s fiery visage, is a painterly marvel. He also manages to portray the range of human emotions and the electricity of battle with equal flair. (His take on Fin Fang Foom had my jaw on the floor.) The art is so good that I’m inspired to pick up a second issue on its merits alone.

Wait and See – James Robison succeeds in capturing the spirit of Reed, Sue, Ben and Johnny, but fails with the on the nose dialogue he uses to bring them to life. Fantastic Four #1 is redeemed though by the gorgeous art of Leonard Kirk.  There is promise, but until that is fulfilled its safe to wait this one out.