With The Mercenary Sea, creators Kel Symons and Mathew Reynolds hope to capture a sense of high-spirited action-adventure synonymous with WWII-period dramas like Indiana Jones & the Raiders of the Lost Ark and King Kong. Jack Harper, “a smuggler and bootlegger currently wanted by the [US] treasury department,” sails the South Pacific in a submarine with his rag-tag group of affably amoral mercenaries, searching for oddjobs and smuggling runs. Harper’s larger mission? To find the fabled lost island of Koji Ra, a mysterious land of milk and honey and monsters and secrets. 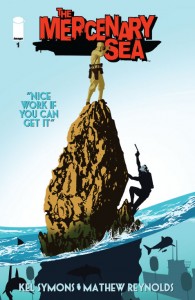 The Mercenary Sea is a throwback pulp adventure with all the proper trappings. Symon’s cast is delightfully diverse, with international accents coloring the dialogue and a spunky young female engineer (think Kaylee from Firefly). The opening sequence is a cleverly crafted subversion of the sort of Apocalypse Now undertones now inherent to the South Pacific-setting. Harper’s crew treks through a dark, ominous jungle, coming face-to-face with strange animals, fiery totems, and, of course, human skulls. A confrontation with the spear-wielding “natives” is filled with tension through Symon’s terse script and Reynold’s moody artwork, but the resolution to the opening sequence is hilarious and befitting to the time and place of the story. It’s a wonderful way to set up the cavalier nature of the characters and the narrative, but The Mercenary Sea isn’t all fun and games; the subsequent events in this issue set up the bounty on Harper’s head and all of the interested parties pursuing our hapless crew!

Mathew Reynold’s artwork is best described as a sort of neo-pulp aesthetic. The stark coloring—intense blues and reds—and the solid lines are inherent to Reynold’s all-digital style of artwork. At first, I was a thrown off by the “photoshoppiness” of the art because it all seemed a like an extended series of BitStrips, but about three pages in I began to appreciate the sort of surreal naturalism and detail of Reynold’s work. Ultimately, the book is pulp through and through, albeit produced with the technologies of today.

Check it out! Kel Symons and Mathew Reynolds’ The Mercenary Sea takes us to the South Pacific seas for some high-octane, old school pulp adventure!