The Fuse is a neo-noir sci-fi dystopian crime procedural a la Blade Runner meets Firefly meets The Fifth Element (without aliens…). After reading writer Antony Johnston’s letter-to-the-reader at the end of the first issue, it becomes apparent that these, along with media icons like Judge Dredd and Star Wars and Law & Order, are the stylistic inspirations for this brand new series from Image Comics. Of course, all of these inspirations are awesome (you should see my Law & Order: SVU theme song dance) and, fortunately, all of these inspirations are readily apparent and effectively incorporated into the style and tenor of The Fuse. 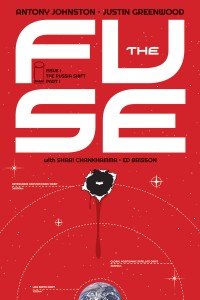 In true procedural fashion, Antony Johnston kicks off this debut issue with a brutal cold open: the murder of a vagrant in Midway City. A few pages later, it’s revealed that Midway City is actually a floating space station in orbit above the Earth. A few pages later, it’s revealed that this vagrant—this “cabler” is actually one in a set of mysterious murders. Fortunately, detectives Dietrich and Ristovych are on the case; unfortunately, Dietrich is a new, straitlaced volunteer from Munich just off the boat and Klem “short for Klementina” Ristovych is a grizzled veteran whose partner just died. Naturally, Johnston works both Dietrich’s fish-out-of-water boy scout characterization and the intercharacter buddy cop drama in this issue, making for an engaging reading even before we get to the mysterious murders and sci-fi worldbuilding.

Justin Greenwood delivers a stylized, pulpy aesthetic reminiscent of Fabio Moon and Gabriel Ba’s work on Fraction’s Casanova. Unlike that sci-fi series, The Fuse eschews surrealism for a grittier, grounded color palette courtesy Shari Chankhamma. Overall, the artwork matches Johnston’s mission perfectly; the comic reads like an urban crime series more than some high-fantasy space opera. Midway City is in space, yes, but its characters, its streets, its drama is real.

Check it out! Image has another genre-bending winner of a series with Antony Johnston and Justin Greenwood’s Fuse #1. Oh, and that Firefly connection? I suppose the Germans are integral to the future of space-travel (probably economically) because the lingua-franca at the Fuse is both German and English, similar to Mandarin’s role in the world of Firefly! Looking forward to following Dietrich and Klem’s case in the pages of The Fuse over the next few months!