Some of you may be curious why the sultry sounds of a burlesque show are emanating from your local comic shop this week.  That is courtesy of Batman #28, as Snyder, Tynion, and Nguyen put Zero Year on a temporary hold, and try their collective hands at putting on a tease show for the upcoming Batman: Eternal series.  With many currently in a hesitant stance on the series due to its weekly costs, there is a lot riding on this issue to push we potential buyers over the fence into giving this ‘risky’ delivery model a chance.  And if Batman #28 is any indicator, the pace and quality of these issues as they hit the shelves isn’t going to be the only thing moving at a breakneck speed once this series starts in a few months. 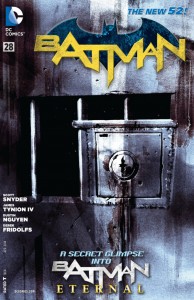 Set somewhere in between the 39’th and 40’th issues of the upcoming Batman: Eternal series, the city of Gotham has obviously gone through some seismic changes.  A ravaged and totalitarian Gotham City already raises questions as our backdrop, as Batman works alongside his ‘new’ cadre of allies to fight against the reigning kingpin of crime.  But will these new recruits be able to hold their own in this new environment?  Has Batman’s actions caused past allies to turn against him?  What has caused the city to fall to this new low?  And will the return of another possibly hold the answers to any of these questions, or just raise more?

Questions, questions, questions.  They are the bread and butter of a tease issue, and Snyder/Tynion deliver on this particular aspect in spades.  But shock after shock can dull the senses, so the true test of its success as a tease comes not only in the raising of questions, but in the masterful way that both  the writers and Nguyen have balanced these mysteries with just enough exposition to keep the reader along for the ride.  The story is fairly simple in its premise, as Batman and friends attempt to liberate a mysterious MacGuffin to help Gotham City, but slowly reveals small enough portions of the total picture to establish itself as a very tiny piece in a grand overarcing tale.  And grand may be short-selling this upcoming series if it plans to move at a pace even closely comparable to the rapid-fire style that this issue embraces.

With radical status quo shifts, characters new and old taking intriguingly different roles, and a last page reveal that will have many people pumping their fists, its easy to overlook how well done the simple characterization is throughout the issue as well.  Keeping the focus mainly on the characters that Batman has surrounded himself with, there is an overall light tone set against the dystopian backdrop that is both energetic and refreshing in its zeal, as these individuals show their true personalities now that they have comfortably settled into their new positions.  It sincerely helps soften the blow of the questions that surround their very presence, let alone their current motivations, and lends that aire of relatability that allows the reader to have some investment in the story even as they are consistently punched in the face with mystery after mystery; easily showing yet another trick that makes this such a great example of the tease issue.

Nguyen also brings his A-game as well, adding a stylized flair to the panels that also raises questions through the subtle hints and expressions that make up his backgrounds.  Giving most of the tidbits we can see of where Gotham stands through the art alone, Nguyen is able to deliver the visual counterpart to what his fellow creators have brought to the tale, without losing a beat in the story delivery that is already on his plate.  It’s another aspect of balance that the issue excels at, and his art does quite a bit in setting the tone of the series before a single word has even been said.

Buy.  A breather from the Zero Year epic that has been going for the last few months, Batman #28 acts as a strong lead-off representative of the upcoming Batman: Eternal series for those still on the fence.  Savvy readers looking for a one-shot tale will be irked by the teasing cliffhanger ending, but as a sly portent of things to come, the issue may just get you revved up for what the Bat-Family has in store for it.