This is the second zero issue for the Archer & Armstrong series, although this time the focus is on the origins of Obadiah Archer and not his partner Armstrong. The Valiant zero issues provide a glimpse into a character’s past, which usually ties into the events of an upcoming story arc. Archer & Armstrong: Archer #0 continues on this trend and creates ties to the greater Valiant universe outside of this title. 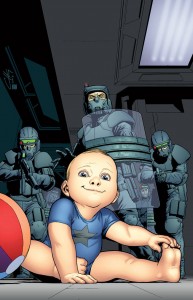 Fred Van Lente has been working on Archer & Armstrong since the series launched. The mythos he has spun for these characters has created its own sort of web in the corners of the Valiant universe. As the focus and angles shift, we’ve seen more and more connections to the larger, connected world. It’s like light catching those strands of a spider web we didn’t seen moments before. We’ve heard mention of the outside Valiant world, and most recently we have learned that Project Rising Spirit has ties beyond Bloodshot and Harbinger.

I’m going to mix metaphors, but Van Lente is taking us further down the rabbit hole in this second of zero issues. He has created a very strong tie between both Archer & Armstrong and Bloodshot and H.A.R.D. Corp. The revelations about Obadiah Archer’s origins should lead to some pretty big changes or repercussions for the character. The team dynamic has been shifting pretty constantly over the past several issues, and there is still the potential for even greater shifts.

Pere Perez has done a lot of work on this series and at Valiant, so the art is everything we’ve come to expect from the series. Part of why I think Perez works so well with this series is his ability to capture both the serious and the humorous aspects of the series. There is a lot of killing and kidding that goes on in the series, and you need an artist that can do both. With this issue Perez shows off the grittier side of his talents. Baron on colors did a decent job of capturing the overall tone of the series, but for this particular issue, I felt the issue seemed a little too bright at times.

Archer & Armstrong: Archer #0 does a lot of what I like in Valiant books. Nothing is off limits, and everything we think we know is constantly changing and evolving. This issue has me pumped up and ready for the coming crossover with Christos Gage’s Bloodshot and H.A.R.D. Corp.

Buy It. Archer & Armstrong: Archer #0 serves as both a jumping on point for this series and the upcoming “Mission: Impossible” crossover arc with Bloodshot and H.A.R.D. Corp. Van Lente shows us that what we thought we knew of Archer’s upbringing was just a part of the truth, and his origins are connected to the greater Valiant U.