I’m still taking baby steps into the Hellboy universe, but what I find interesting about it is the tone most of the books take. Somewhere on the periphery of each book there seems to be a self-awareness to the fantasy and the absurdity of the stories and characters, but the actual text of most of the books is unflinchingly serious. None of them, however, wear this duality more than Lobster Johnson, whose very name betrays the absurdity of the premise, and yet the character is so stoic as to compete with Batman’s blackest moods. 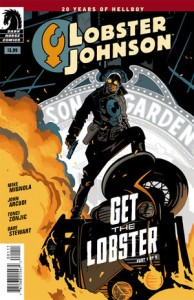 The latest miniseries to bear his name is Get the Lobster, a five part arc featuring the vigilante in his element. This first issue is one of those that throws the reader into a well established world and requires us to do all the work to catch up. The main line of the story takes place around a couple of pro wrestlers who go on a crime spree, but there are also shadowy figures pulling the strings, an interlude in the country manor of a wealthy idiot who has it out for our hero, and The Lobster himself, who appears both utterly simple and unknowingly complex.

This type of pulpy story can either be deadly serious or tongue-in-cheek fun, and somehow Lobster Johnson seems to straddle the line between the two. Maybe the better comparison for the character is The Shadow, who believes his own story one hundred percent, but when you take a step back and look at it again, you start to see how silly it all is. It’s a delicate balance to be sure, but Lobster Johnson maintains that balance in a way that I find absolutely compelling.

Occasional Lobster alumnist Tonci Zonjic returns for Get the Lobster, and this is where the book really shines. I had not seen Zonjic’s work before this issue, and I found myself triple checking the cover to make sure that it wasn’t a Francesco Francavilla piece. Zonjic’s art is beyond perfect for a book like Lobster Johnson, reminiscent of Chris Samnee and Francavilla all throughout, and expertly supported by Dave Stewart’s colors. This excellent matchup is what really brings the balancing act of this book to life and makes everything, somehow, believable.

Buy it. With the way that the story is presented, I believe this will read better in trade or otherwise all-together, but it’s a book that is not to be missed. Mignola and company do a wonderful job of slicing the Hellboy universe into pieces that do not require foreknowledge–like a minefield of jumping-on points. Don’t be shy about picking up Lobster Johnson, even if you’ve never picked up another Hellboybefore. Beware, however–you won’t want to stop once you’ve dipped your toe in.