To quote the internet from a few years back, ‘What is this I don’t even’.  That is the nice way of describing my reaction to the first spotlight cast on the Joker’s Daughter during the hodge-podge of titles known as Villain’s Month.  Moving forward, this feeling did nothing but amplify itself as the character found itself embroiled in a Catwoman plot of equal zaniness.  Absurd, comical (not in a good way), and downright damaging; it looks like DC felt the same way about where this potentially popular character was left and has called in the salvage operation from the up-and-coming writer Marguerite Bennett alongside Meghan Hetrick-Murante in this week’s one-shot issue of Batman: The Joker’s Daughter #1.  Calling this task anything less than Herculean is an understatement at best, but even with a few hiccups along the way, this creative duo just may have pulled it off. 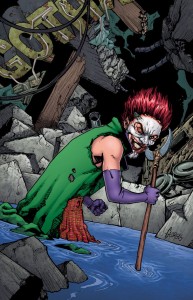 After her latest escapades have left her abandoned within the sewers alongside the severed face of the Joker she so cherishes, the Joker’s Daughter finds herself consumed by the need to get closer to this idol of villainy she worships.  Symbolically, psychologically, or even tangentially; her desire for any link to the Joker drives her along a new path that will put her resolve to the test.  Meeting others who have been touched by the Joker’s chaos, can she continue on knowing the damage that follows in his wake?  And once she has gone down this road, is there any way to turn back even if she wanted to?

Looking at this issue, it is far and away an improvement on the character from where she stood after Villains Month.  By making the character psychologically broken in her desperation to find meaning, we are provided a much firmer link to the Joker than the tenuous bonds of her initial introduction.  Bennett shows herself as more than capable of writing a character such as this, focusing on the obsession that drives her with an uncomfortable relentlessness, and even throws in a few sly chuckles as our protagonist shows her true ineptitude at being a villain.  On top of those positive traits, Bennett also does a splendid job at pulling in loose threads from her own Annual as well as multiple Bat-Family titles to provide a seamless narrative that really helps make the Bat titles feel like a living setting.

The artwork from Hetrick also does a splendid job of highlighting the Joker’s Daughter’s delusions by placing the point of view at slightly off kilter angles throughout issue.  Flexing her ‘grotesque’ muscles as well, there are some disturbing images brought to the table that show they can work when matched with Bennett’s driven inner monologue, as well as when juxtaposed against some of the dark humor moments as well.  I did have some minor issues with staging during the Batman tussle, but these are minor quibbles at best and do nothing to hamper the storytelling of the moment after a second glance.

Even with all of this praise though, I have to pull short of recommending the title as a whole because of what it was.  While the driven nature of the protagonist’s neurosis does wonders for salvaging the character from where she was prior, its repetitive nature does grow a little tiring when put into the spotlight of her own issue.  With very little in the way of action or forward momentum, the issue feels caught in a whirlpool, circling its chosen theme with maximum effectiveness but sadly with minimal impact.  Hoisted on its own pitard, it is the very same qualities that make it a wonderful salvage operation that also make it a less than inspiring solo read.  This is amplified moreso at the end of the issue, when it seems that the entire repair of the character was being used as a vehicle for ‘bigger and better’ things instead of for its own merits.

Pass.  If you are truly interested in the character and were letdown by her previous appearances, you will be elated with this repair of the character in the DCU.  Those who are looking for a solid one-shot could certainly do worse, but with minimal momentum coming out of the issue (other than the setup return of someone much more popular), there is little to find in this one-shot outside of the character work itself.