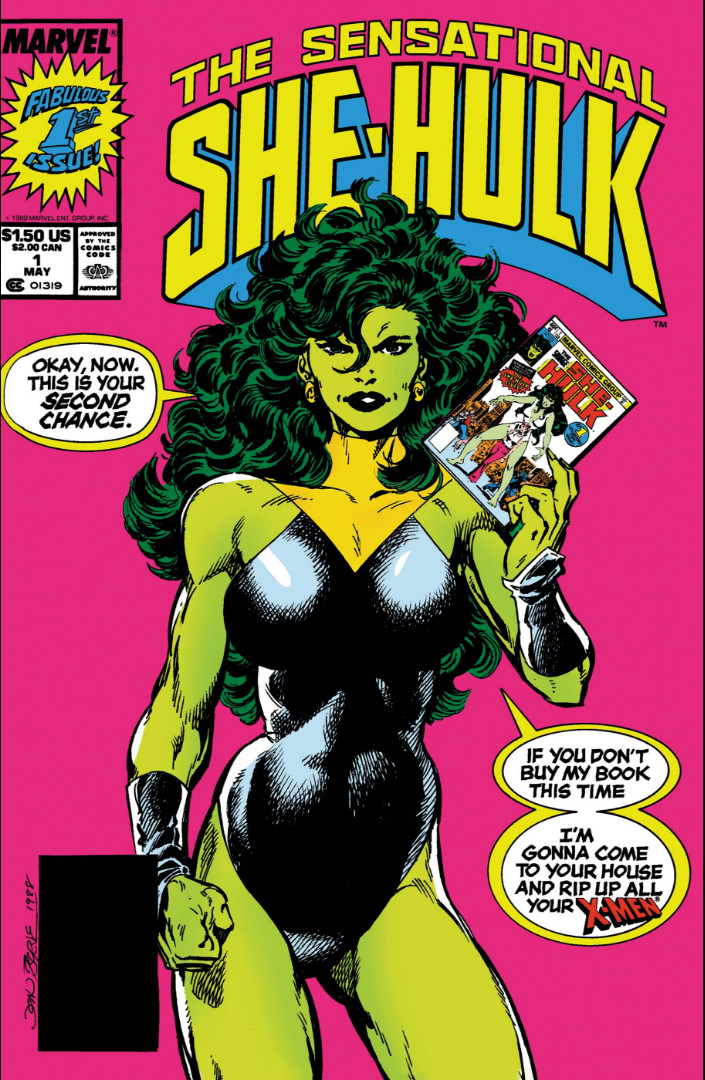 (With the new Charles Soule/Javier Pulido She-Hulk series beginning this week, it seemed an apt time to revisit the history of Jennifer Walters and her Gamma-powered alter-ego!)

THE SENSATIONAL SHE-HULK,
or “Green is the colour of my true love’s hair” (with apologies to Nina Simone!)

After four solo series and membership in both the Avengers and the Fantastic Four, Jennifer Walters has found her way back home to Manhattan and the Baxter Building in the Matt Fraction/Michael & Laura Allred FF. Her time as The Thing’s replacement during John Byrne’s tenure on Fantastic Four would set the stage for some of the funniest, most off-the-wall comics ever in her next book, The Sensational She-Hulk, and more specifically in this case, issues #1-8 and #31-50 by John Byrne.

We should start at the beginning, but as usual, I’ve gotten ahead of myself again…

(Robert, have you ever considered de-caffeinated coffee? Audrey)

Sorry about the interruption folks; I’ll try to keep these to a minimum as we go along.

The She-Hulk was created by Stan Lee in order to stay ahead of the producers of the Incredible Hulk TV series, when rumours began circulating that they were thinking of introducing a female Hulk character, and one that Marvel would hold no rights on! With typically gorgeous art by “Big” John Buscema, The Savage She-Hulk #1 would tell the story of an on-the-run Bruce Banner seeking refuge with his cousin Jennifer Walters, a Los Angeles-based attorney. When gangsters involved in a murder case try to silence Jen, she is grieviously wounded, and in order to save her life, Bruce would give his cousin a life-saving blood transfusion…with the expected bad results. The book would debut on newstands in late 1979/early 1980 to modest acclaim at best, and slog along for two years before being cancelled with barely anyone noticing.

(Hey, wait a minute there, fella…) [That’s odd; Audrey, is there someone else there? rrr]

The She-Hulk would then become a member of the Avengers, as Roger Stern, that book’s scripter, unlocked the potential of the character by the brilliant stroke of writing Jennifer as someone who simply and utterly enjoyed being the She-Hulk 24/7!

(I always liked Ol’ Sterno!!) [This is getting tiresome, Audrey; what’s going on over there?]

Moving on, during this Avengers period, the Secret Wars mini-series brought nearly every Marvel hero and villain together to battle on a distant world. At the conclusion, Ben Grimm would stay behind to “find himself”, and Fantastic Four writer/artist John Byrne would “borrow” the She-Hulk to use as his replacement in the group beginning in issue #265, a role she would fill until his return in the 25th Anniversary issue, #296. The friendship between the two that would lead to her current status in FF would blossom in issue #299, where “Shulkie” helped Ben (via a knock-down, drag-out brawl!) work through his feelings about the up-coming Alicia/Johnny nuptials.

(You had to bring that up! I would have thought that everyone would have forgotten that icky Johnny/Alicia stuff, or that Marvel had ret-conned that story-line by now—at least twice! Jeez, you’re as bad as Byrne with remembering this old crap!)

Quoting the aforementioned Mr. Byrne: “When Mark Gruenwald asked me to create a new She-Hulk series (SENSATIONAL, rather than SAVAGE this time!) he had one editorial demand: “Make it different!” I thought about this for a while, and then decided it might be fun to push Roger’s notions as far as they could go, and have Jen be aware (only in her own title, mind you!) that she was in a comic book. And then to play with — but never mock — the conceits and foibles of the format. Mark loved the idea, and thus She-Hulk got her second series.” (Thanks to Byrne Robotics for that quote!)

(Even after all these years, he can still talk a blue streak, can’t he?) [Oy, gevalt.]

As I was about to say, in Sensational She-Hulk, Jennifer Walters would break the Fourth Wall, sometimes ripping through the pages to move from scene-to-scene, and most often, commenting on the story, the art, and comic book tropes and cliches to the readers and the editorial staff, with particular attention paid to slights visited upon her by Mr. Byrne, which included marrying her off to the Mole Man, and the infamous opening to issue #40, where taking off from a letters page comment about increasing the sales of the book, Jen was depicted jumping rope in the all-together: 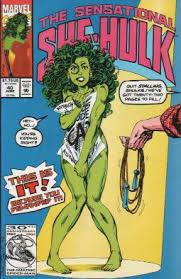 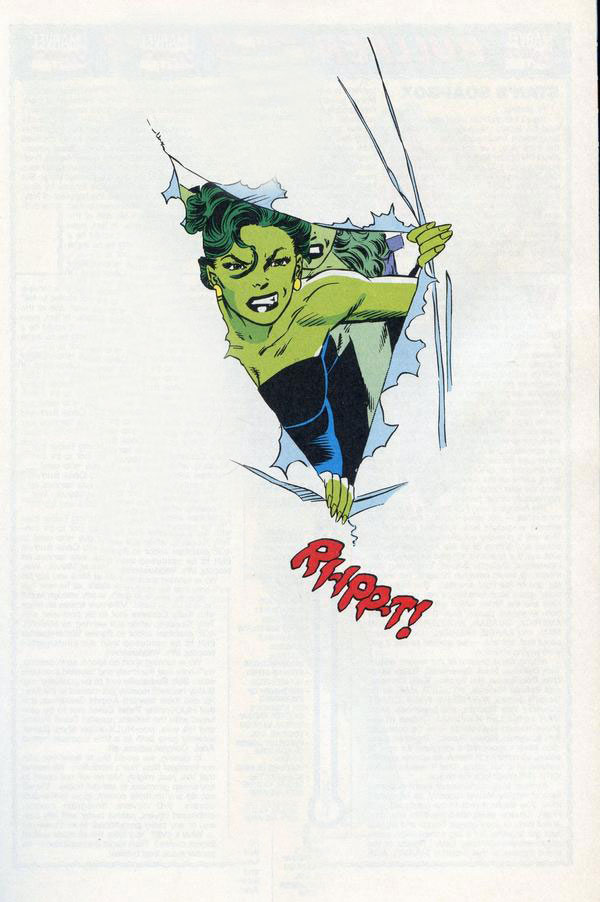 O.K., I’ve had it! You don’t need to show any more of that! It was bad enough living through it the first time! Who needs some aging fan-boy to bring it up after all these years?!? Audrey, be a dear and get Bob out of here for a bit while I finish this up. Thanks a lot; you’re a peach, kid!

Jennifer here, and now that I’m on this side of the page I can stop yelling. Sorry for the volume levels before, folks, but it’s the only way to make yourself heard around here. Back to my story:

Byrne had obviously watched too many Marx Brothers movies where Groucho talked to the audience, though knowing him, his influence was probably Bugs Bunny cartoons or that “Moonlighting” show that was popular then. (Gee, I wonder whatever became of the guy who starred in that?) Although it was nice to be able to get my two cents in now-and-then, I don’t think it was enough to balance out loser bad-guys like those Toad Men you saw before, not to mention Dr. Bong, Spragg the Living Hill, or that Xemnu clown who covered me in green fur! I still have marks from the super-scientific Laser-olosis (TM) that got rid of it!

I gotta say, it was fun while it lasted though, and when The Byrne-ster left after issue #50–well, promise you won’t tell him–it was never quite the same, even with talented writers like Steve Gerber, Dan Slott and Peter David telling my stories. Maybe in the new FF book, this Fraction guy will let me talk to you folks again? Honestly, I should just ask him myself when he’s on this little dog-and-pony show they run around here; or maybe I should ask his better half, that nice Ms. DeConnick, for a guest spot in an issue of Captain Marvel? Does that sound O.K. to you, Bob? [-Anything you say Ms. Walters, anything you say.-] Hey, we’re friends now, so just call me Jen, old-timer!

The Sensational She-Hulk is my #4 Favorite Super-Heroine, and is at #14 on my Top 100 Comics Characters list!

(Bob, that’s very sweet of you. If you had told me that before…)

This piece was composed whilst listening to the incredible Nina Simone, and her classic song “Black is the colour of my true love’s hair”, collected on her “Anthology”. My new writing partner Jennifer is correct when she cites Groucho Marx as the source for “Fourth Wall Breakiness”; check out this scene from the 1932 film “Horsefeathers”: