I’m so lost with Marvel. I don’t know what’s up and what’s down. Everytime I feel like I have a handle on what’s going to be good and what’s not, things get turned all topsy-turvy on me. First, I completely skipped the All-New Marvel Now Point One issue because the last Point One was terrible. Turns out that I really enjoyed the All-New issue, specifically the parts with Loki. Before that, I had zero interest in Loki: Agent of Asgard. Turns out I was wrong about that, too. The issue was not only fun and funny, but presents some great ideas that should help tie together the Loki who got his start in the silver age with the Loki we have come to love on the silver screen. 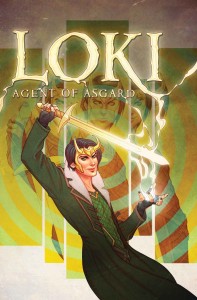 If you haven’t read All-New Marvel Now Point One, I can’t recommend it enough, especially if you are planning on picking up Loki. It’s not necessary for the issue, but it is a fun read and will help give the events a little more context. In his debut issue, we see Loki on his first mission for good, given to him by the All-Mother. Of course, it requires breaking into Avengers Tower. I’m not going to spoil any of it, but let’s just say that hilarity ensues.

Two things I found surprising and compelling about the issue: Loki’s motivation, and how the story ties in with Marvel history. The first plays with the idea of what it means to be a god–what is it that is important when you live forever? To Loki, it seems to be how he is remembered, and that is his motivation to do these missions for Asgard: to have the songs about him changed. It might be a somewhat typical anti-hero setup, but it also works perfectly. For the second, writer Al Ewing gives us some glimpses into the Loki of old, when he was just a villain, before Tom Hiddleston made him a lovable scamp and billions of dollars of film revenue came pouring in. What Ewing seems to be trying to do is reconcile the character across Marvel history (which should be called “pulling a Johns”) and I believe he’s on the right track so far.

Art in this issue is right on point. Lee Garbett’s style is slap-sticky and fun without being goofy, muscle-bound and superhero-like without losing expression. He’s also done a good job of bridging the gap between the Loki and the Avengers of the film universe and those in the comics. The color work here is also solid as there is a nice, balanced use of Loki’s signature green without going overboard, and even managing to keep Loki and Hulk separate and unique.

Buy it. What Marvel’s got right now that so many other publishers are lacking is fun, and Loki: Agent of Asgard has it in spades. What it also has, however–over a title like Deadpool–is a character with compelling motivation and some potential for real depth. This is, of course, only the first issue, but it’s also the perfect first step for a title that I previously had no interest in.