“I’ve been drowning for as long as I can remember.”

Since his inception, Frank Castle has inhabited the darker recesses of the Marvel universe.  He’s a character that is trapped in his own rage, hate, and grief, isolating himself from the rest of society as he single-mindedly goes along on his mission of vengeance.  The Punisher will do what needs to be done, even if that involves crossing the line that would push other heroes over the edge of their comfortable sense of morality.  It’s a horrible burden, one that he shoulders alone. 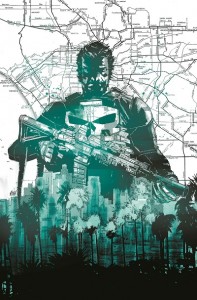 Nathan Edmondson displays his understanding of this core characteristic of Castle in our first encounter with the man in the death’s head t-shirt in The Punisher #1.  “Pain is drowning,” he declares, going on to say that the only way to find relief for that pain is to start swimming up, to find the right direction towards whatever sanctuary you need.  It’s a striking little monologue, illustrated beautifully by series artist Mitch Gerads, and it seems to be an attempt by Edmondson to reassure people that he knows what the Punisher is all about.  As we continue through the issue, we soon see why this reassurance may have been needed.

Good writers, or any artists for that matter, take risks.  In superhero comics, it can be far too easy to get bogged down by the history of the character and to not put your own spin on it, but Edmondson seems to be doing what he can to swim against that current.  Of course there is Frank’s big move from New York to Los Angeles, but this change is superficial since the Punisher is custom built to fight sleaze and depravity regardless of which coast he’s calling home.  So where are the risks being taken then?

Fast-forward past the issue’s opening scene and you’ll find an exterior shot of a run-down diner, and sitting within that greasy spoon is Frank Castle.  Not only is he out in public, but there’s even some banter going back and forth between him and the diner’s cook.  And hold on to your hats folks: at one point he even cracks a smile.  Other than when he’s putting bullets in the heads of bad people, when was the last time you’ve seen that happen?

Many will argue that this goes against everything that’s defined the Punisher in the past.  If he’s not killing people, he should be down in a sewer somewhere, sharpening knives, cleaning a rifle, and doing his absolute best to keep the emotional wounds he suffered so long ago as fresh as the day they were made.  That loneliness and pain is what gives him his edge, it’s what makes him so ruthless.

Admittedly, the diner scene is a tad jarring at first, especially when you see that grin creep across his face, but it also feels fresh and not entirely unwelcome.  As we see later on in the issue as Castle tracks down a drug cartel and doles out his own extremely violent and cold-blooded brand of justice, his edge certainly hasn’t left him.  However, you do get the sense with this debut that Edmondson wants to push the Punisher out of the arena we’re used to seeing him in.  Maybe he doesn’t always have to be holed up and licking his wounds all the time.  Maybe, just maybe, he can breach the surface of his grief for a moment and breathe in the air for once.  It’s a novel idea to be sure, and it’s one we should be open to seeing explored.

Buy It – Nathan Edmondson and Mitch Gerads don’t exactly reinvent Frank Castle in The Punisher #1, but they do shake up his character just enough to give this series an exciting new angle.  And if you’re picking it up for the violence and action that has come to represent the character in the past, there’s plenty of that to be had too.