Everything is relative.  For the last two and a half years the resounding theme of the DCU backbone has seemed to rely upon that very statement, and it’s not difficult to see why.  After supplanting the ‘established’ timeline with the New 52 reboot, a move that hinged on reimagining characters and relationships along the way, comparisons between the new incarnations and their predecessors have been the measuring stick (for good or ill) of each and every title released by DC Comics since that day.  Even now, a few years in, the core of many points of contention lies within the grey area of relativity; spawning endless debates on what is expected from each reader’s prior experiences in contrast to what is delivered today.  So why try to fight the pervasive nature of relativity in this venture?  Let us embrace it instead!  It’s a notion that Geoff Johns certainly seems to agree with inside the pages of Forever Evil, as he takes a hard look at that sliding scale by showing that the definition of evil; depends entirely on who is answering the question. 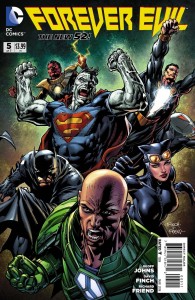 The hazy battle lines have been drawn, as Batman and Catwoman team-up with the unlikely allies of Lex Luthor and his band of villains against the Crime Syndicate and their lackeys.  With ever-shifting loyalties causing massive swings in the tide of battle, can Batman keep this team of necessity focused on his goals?  Or will his status as the only ‘hero’ left place him firmly in the passenger seat for this group’s actions?  Meanwhile, as their numbers continue to fall, the Crime Syndicate find that the evil who drove them from their own world has followed them to Prime Earth as well.  Which begs the question, is the enemy of my enemy’s enemy…my friend?  (Don’t worry Batman, I don’t know either.  But I would hazard a guess at no.)

Before we begin, I have to admit that I have had some concerns on pacing with this Forever Evil event.  The flow of a tale, as it deftly swings from its peaks of action to its valleys of exposition, is as paramount to the story as its characters and motivators.  Which makes it all the more difficult to judge a chapter-based medium such as this, where the pacing of the story can also find itself at the mercy of its physical delivery to the reader.  And this week’s Forever Evil #5 is quite possibly one of the best examples of this conundrum in practice.   An entertaining, action-packed story lay within its pages; filled to the brim with some of the best characterizations these villains of the DCU have had since the relaunch.  But, while going back to read the five issues released thus far has shown that there is no problem in the pacing of the story when read together, the staggered nature of its release (riddled with small delays throughout) has given me the relative (there’s that word again!) perception that it is dragging on.  It is something that should be mentioned, but is surprisingly difficult to support if I am only critiquing that which falls within the pages themselves.

Looking past that (possibly?) critical element, or for you intelligent trade-waiters, Forever Evil #5 moves the chains for another first down by not only advancing the narrative it has established to its next logical step, but also by adding even more mysteries to be solved in its final two issues.  Mind you, this is an event that is already rife with interesting questions to be answered, hopefully making this the setup to an amazingly explosive finale of reveal after reveal should it continue with the zeal it has to date.  (No pressure DC.  No pressure.)  At face value though, this chapter cements itself as a turning point in the story, and does so with the confidence and flair that screams it knows where it is going, and the reader cannot help but follow it along to its final destination.

Johns and Finch do this by making the characters themselves do all of the heavy lifting.  Even as the issue focuses on a single battle between these opposing forces, the dynamics and interplay of these (at best) rivals keeps what should have been a stale chapter of punch-em-ups fresh and exciting.  I’ll be the first to admit the mixed bag that was Villain’s Month filled me with more than a little trepidation as we moved into an event focusing on the other side of the superhero fence, so I am elated to see that with a strong narrative to guide them, the villains of the DCU can easily pull their weight in their new temporary role as protagonists.

Sticking with the Buy!  Even if the ‘zomgearthshatteringeventstheworldwillneverbethesameagain‘ schtick is not your cup of tea, Forever Evil #5 contains more than enough character and appeal to amuse and hook most readers.  And with more intriguing mysteries added to the twists and turns of the story to date, the only thing left to do is wait and see if it all pans out into a good, fulfilling ending.  Of course, good and bad are all relative…