Welcome to a brand new weekly feature called TV Time, where I bring you the latest updates on all your favorite current and upcoming comic book based shows.

The past few weeks have been an exciting time for television. Between planning schedules for the upcoming Winter Olympics and preparing for the May upfronts, in which all of the networks present their schedules for the 2014-15 Fall season, a lot of news has surfaced about upcoming comic book adaptations currently in the works. The biggest of which comes from The CW. At their TCA meeting a few weeks ago it was announced that The Flash, the upcoming spin-off to the hit show Arrow, was given the greenlight and that Geoff Johns, who has worked on Arrow in the past, will be writing the pilot. Grant Gustin, who played Barry Allen in two episodes of Arrow, will be playing the lead but since the initial announcement, more cast members have been revealed as well as who they’ll be playing:

Speaking of Arrow, it was also announced that The Huntress (Jessica de Gouw) would be making her return in an episode titled “Birds of Prey.” Considering that Black Canary is now part of the show, what are the chances of seeing a confrontation between the two in the episode.

In terms of other upcoming pilots, the long in development Amazon television series (a Wonder Woman adaptation) has been nixed, possibly due to the recent casting of Gal Gadot as the character in the upcoming Superman/Batman film. I,Zombie was picked up to series and Rob Thomas (Veronica Mars) will be in charge of it. Finally, the Hourman television series is currently still in production but has a script and is now just working out the details before they go to pilot. At ABC’s TCA meeting, the long rumored Agent Carter television series was finally given the greenlight and that Hayley Atwell would indeed be reprising her role as the title character. Michele Fazekas and Tara Butters, creators of the cult-hit show Reaper are currently be looked at as the showrunners and Christopher Markus and Stephen McFeely have written a pilot script.

Speaking of Carter’s, it was reported earlier this week that Emily van Camp, who will be playing Sharon Carter in the upcoming Captain America 2: The Winter Soldier, will be making an appearance in an upcoming episode of Marvel’s Agents of S.H.I.E.L.D as a tie-in to the film.

NBC officially greenlit their adaptation of Constantine at their TCA meeting and since then, details have emerged as to who will be behind the camera once the show gets going. Neil Marshall (The Descent) will be directing the upcoming pilot while showrunners David S. Goyer (Lost) and Daniel Cerone (The Mentalist) will be writing the pilot. No casting details have been revealed yet.

Guillermo Del Toro’s upcoming adaptation of The Strain had it’s first teaser released. Check it out: 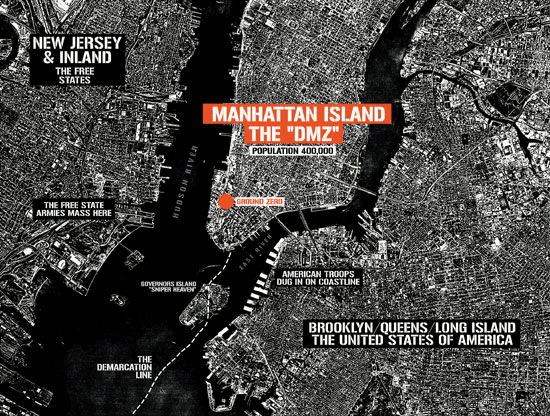 It was reported earlier today that SyFy has picked up an adaptation of the Brian Wood series DMZ, courtesy of Andre & Maria Jacquemetton (Mad Men) and David Heyman (Gravity). No casting announcements have been made yet but the Jacquemetton’s have written a pilot script and are planning on shooting later this year.

With that, I’ll see you all next week for another edition of TV Time, where I bring you the latest updates on all your favorite current and upcoming comic book based shows. Leave your thoughts in the comments below and let me know what you think.