Superior Spider-Man is winding it’s way to the reappearance of Peter Parker, and issue #26 does it’s best to setup his return. Unfortunately, I believe this is the weakest issue of Superior that I’ve read yet. Apart from the committee of artists and the otherwise disconnected story, not much is really happening here. There is one major revelation in the issue, but it’s nothing that couldn’t have been handled elsewhere. I’m just glad that this books comes out so often so that we can get right into Goblin Nation. 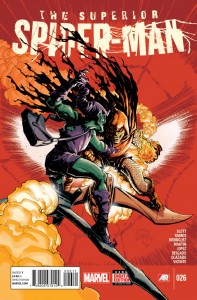 Dan Slott splits the issue into three different stories. First there is the fight between the Goblin King and Hobgoblin, which seems to wander everywhere from, “Let’s work together,” to, “There can be only one.” Then, the Avengers finally confront Spidey about his odd behavior. That ends up playing out like the lamest intervention ever. And finally, we get some brief interludes inside Spider-Man’s head as Peter fights his way back into existence. Peter’s monologing is cheesy, but works better than any of the Avengers’ dialog in that story. As I said, we get a revelation as to the identity of the Goblin King, but other than that this is a pretty forgettable issue of an otherwise good book.

As you can see above, there are a lot of artists credited in issue #26. Ramos pencils the goblin fight while the others take the Avengers story and the Peter story, though I’m not sure which artist does which. If you have to have multiple artists on a book, this is the best way to do it in my opinion, but since these artists all have different styles, it makes the book feel more disconnected than I would like. To boot, the colors in each part are such different palettes and styles that it further isolates the separate plots. I absolutely love Ramos’s portrayal of the various goblins, and whichever artist took the Avengers story also did some very nice work, but at the end of the day it’s not enough to hold the book together and make it feel like something necessary. To be honest, the jumping around makes the issue feel more like an annual or a one-shot than a regular series title.

Wait and See. If you’re pulling Superior then you might as well get this, but if you’re just jumping on for Goblin Nation, I say hang back. I know readers will want to see how Peter returns, but you may be better off just waiting until issue #27 and saving four bucks. There isn’t any information in this issue that won’t be rehashed in the next.