A new international trailer for Captain America 2 was released today and in it, we get our first look at (presumably) Sharon Carter aka Agent 13. The trailer combines elements of the first two trailers that have been released so far, but Revenge’s Emily van Camp had yet to be seen until now. She’s visible at the 1:08 minute mark on the trailer but here is a still in case you miss it: 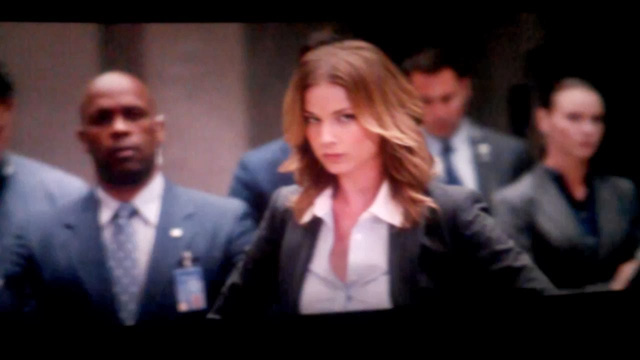 Little is known about Emily’s role so far but considering The Winter Soldier is supposed to borrow heavily from Ed Brubaker’s run of Captain America, then chances are her (potential) Sharon Carter will play a larger role than we think. There is also currently talk of her appearing in an episode of Marvel’s Agents of S.H.I.E.L.D. to coincide with the release of the film. This should be fairly easy, considering that she works just across the ABC lot on the hit drama Revenge.

You can check out the trailer for yourself here:

Captain America 2: The Winter Soldier will be released worldwide on April 4th.

What are your thoughts on the look of Agent 13? Are you happy with the casting? What about the trailer itself? Leave your thoughts in the comments below.