Drumhellar is a psychic detective who runs around ingesting psychedelics with his partner, an ethereal pink squirrel called Harold. He follows one lead after another, each weird and supernatural case leading to another mystery. Most recently he’s been camping out at his ex girlfriend’s house trying to figure out what’s killing a local farmer’s livestock. His last connection was a “bogman” who he’s keeping out of trouble by allowing them to dig through the carcasses left behind. 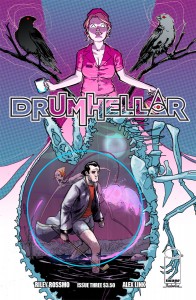 This book is just as queer as it sounds. Oh, wait, I forgot something. There is a woman who witnessed a recent encounter between Drum and another ex, one with more nefarious intentions. In her quest for answers to explain what she saw, she reaches out to a local radio show and meets someone who is apparently looking for Drumhellar and is willing to reward her for some help in finding him. This radio host seems to be some kind of floating baby who’s lived multiple lives, or a really long life, and wants to live more life. Yeah, I have no idea. Throw in some ghostly dinosaurs and you’re all caught up on this episode of Drumhellar.

This series has been good and bad, for me. The art of Riley Rossmo is always a joy, always, and it is what makes this story such a visual party. I honestly can’t come up with a sensible explanation of anything that’s happening in Drumhellar, but maybe that’s the point. I just don’t know. It’s fun, quirky and comical, sometimes spooky. As far as stories go, it’s a jumble of characters that all just feel like background noise to Drum and Harold, with a mixed bag of plots (loosely named) that although connect each to another, don’t seem to go anywhere.

Verdict: As much as I love Rossmo, this book will not keep many people engaged for much longer. It’s very pretty to look at, like a psychedelic painting in comic form, but the story is confusing as all hell. I’ll probably continue to check it out, because I can enjoy it without really getting it (Lost, anyone?), but I’m guessing many people won’t stick with it. Read it online if you want to see what’s next, but I’m sorry to say I wouldn’t keep buying this one.