“The original Dynamic Duo, together again at last!” has, for the past couple of weeks, been the trumpeted description of this double-sized annual issue of Batman and Robin.  It’s a hook that hasn’t really needed that much baiting; this is a relationship many fans have been salivating to see since the debut of the New 52 version of the Bat-universe.  And to think of it now, this is something people wanted even before DC decided it was time to hit the restart button.  As Nightwing, Dick has never really left the inner circle of Bruce’s allies, but grown-man Grayson has a significantly different dynamic with Bats in comparison to the young ragamuffin who first put on the old red, green, and yellow.  So now, with the book finally in our grubby little mitts, the big question is this: how well was Peter J. Tomasi (whose Batman and Robin run has been pivotal in defining this era’s Dynamic Duo) able to capture the magic between this original partnership? 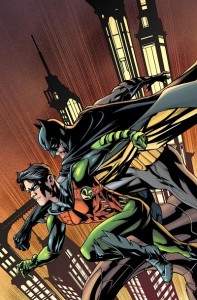 The short answer to this question, if you’re feeling especially pessimistic, comes in the form of a simple shrug.  There are definitely some great moments in this issue that make the book feel worth its $4.99 price-tag, but it is also plagued by some problems that keep the book from reaching the expectations that were (perhaps unfairly) heaped upon it.

Fans who have been missing that wonderful dynamic between Dick and Damian will enjoy, and undoubtedly feel their heartstrings pulled by, the scenes that bookend the story.  These moments, alongside the stellar art by Doug Mahnke and Pat Gleason, are hands-down the highlight of this issue.  They both harken back and pay tribute to the days when Dick and Damian fought alongside each other as the Dark Knight and Boy Wonder, a combination that many readers were skeptical of but ultimately fell in love with.

Where the story lags is in the tale being told by Dick.  The insight given regarding this first week of the partnership between him and Batman feels limited, with most of it involving Bruce yelling at Dick and forbidding him to follow his vigilante path because of a simple mistake made during his first night out in the field.  This harshness, while certainly not unexpected at this early stage in Mr.Wayne’s education in crime-fighting partnerships, still comes off as jarring and leaves Batman in a negative light.  It initially feels like it’s supposed to be a story where Dick proves his worth to Bruce and earns his spot by his side, but we never really get that payoff.  Instead, Bruce just stands back and, unbeknownst to his ward, uses him to find the criminal he was tracking.  In hindsight, this is a logical storytelling move because it highlights Bruce’s overbearing nature, something that most likely made Dick eventually branch out on his own, but it would have also been nice to get one or two lighter moments between the mentor and his protégé.

If you’ve been following this title all along or are looking to have your thirst for that Damian/Dick dynamic to be quenched, then buy Batman and Robin Annual #2.  However, if you’re thinking of picking it up because you want to see some of that classic Dynamic Duo magic, you might be a little disappointed.